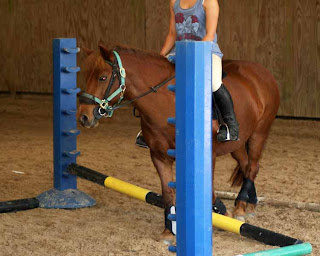 Lots of fun today working with a New Forest pony called Saffi who for a number of years has been worried about poles and jumping. The cause for her fear may be that she came to grief in a Jacob's Ladder type jump some time ago. She has been checked out very thoroughly to make sure that there is no physical reason why she shouldn't be able to jump. Originally she sought to avoid or refuse the jump until a trainer closed that option and now she rushes instead even with her rider carefully sitting pretty passively. Rushing a jump is often mistaken for a pony enjoying her jumping but it can be a sign that the pony is actually very worried and just wants to get it over and done with. Saffi is actually worried about being 'bitten' by the poles.

As well as working on the ground going over the poles, we did work on asking her rider to breathe more deeply when on board.  Her rider is really good and patient and doesn't interfere.  We ended the session working over one very small jump with a box of poles immediately afterwards where she could be asked to simply stand and relax. Too early to be doing more than one jump at a time and gridwork simply winds her up more quickly. Once again we wanted to work on her 'yes' and her 'maybe' rather than allowing her to practice her 'no' even if it is a forward going 'no'! This pony is very lucky to have a team of three people and a sympathetic yard owner all interested in her welfare.

"I did find it really interesting and hopefully with us all working together Saffi will get more confident and start enjoying herself. I thought she made a lot of progress, especially nearing the end. I've not experienced her starting to consistently walk over a raised pole, so I was really glad of that and it definitely gives me something to work on. I also found the breathing and looking at your own body and muscles when riding to influence the horse really fascinating, because it is so effective yet so simple."MLA

"Thanks so much for you advise and notes on Saffi. Its so lovely to have something written down in black and white especially as there is so much grey with her !!!  Your memory is amazing as you remembered all the key facts about our little mare. We will definitely put into practice all you have advised.   I bought a clicker today as my click sounded more like a 'cluck' and I bought her some low-cal pony nuts. We will also keep you in the loop for consistency. I feel very relieved that Mari-lisa found you and was so adaman you could help as I truly believe we will get there now. I would love to see Saffi give have safe fun over fences." FF
Posted by Loisaba Wildlife Conservancy at 9:38 PM