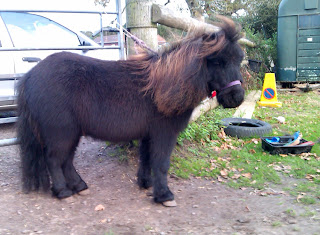 On an average day, I get twenty emails about horses some of which need a visit and some only need brief advice. The advice I give is always hedged by the fact that I have not seen the horse concerned and therefore I rarely give black and white answers and I will urge caution. When I have seen a horse already I feel much happier giving advice knowing a lot more about the horse's character and the skills of the owner. Most of the advice I give is free - where I have worked with someone before it is part of the unofficial service level agreement. Where I haven't worked with someone before I'd like at least a thank you (happens surprisingly little considering how much effort and help I give) or a small donation to HorseWorld, the DPTC or another horse charity you fancy.

I'm going to use some of the questions I get asked as good BLOG material so here goes:

Q:"I wondered if i could ask for your input on something. As you know M was stolen at 10 months old and went through God knows what... but he's always been funny with his feet... one front leg in particular.. we've work on it and he will pick all 4 feet up, stand to have his feet picked out, trimmed etc, I've even had him wearing brushing boots etc We think they hobbled him or tied his legs together at some point as he was so funny with his legs and not sure he's ever really entirely got over it.

When we are handling his feet he is a bit funny with his front right, he will act like he is trying to bite but completely misses you and ends up biting his own leg. thinking back this is something he did with me on several occasions.. again completely missing my hand/arm and biting his own leg... its not all the time.. but quite often. Medically I don't think there is anything wrong, no lumps, bumps, cuts, heat or anything... and the fact he seems to purposely bite his own leg is very confusing to me. I used to ignore the behaviour as he wasn't actually biting me.. so he got no reaction; he isn't getting his foot put down. because he does it.

This is a pony I have met and worked with, a miniature Shetland with bags of character. To me, this isn't learned behaviour at all. It goes back to that well of instinctive, automatic behaviour that comes with being a horse...

A: I think most horses have one dominant leg which especially in males, would be the one they would use to play and fight with. The fact that he bites his own leg means that he is consciously trying to override this and not biting people. Good pony! It’s instinctive, automatic behaviour which they have to switch off rather than a behaviour they have to learn. You could try using strong body language when he does it or just ignore it as you have been doing so far.

Posted by Loisaba Wildlife Conservancy at 9:04 AM