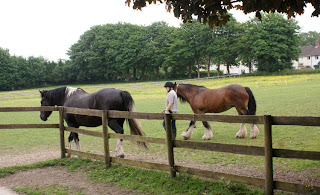 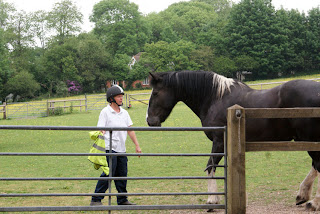 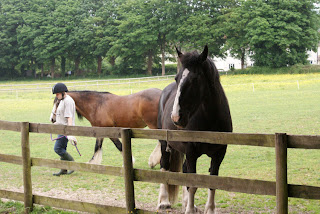 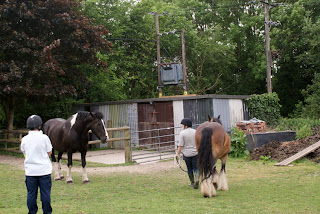 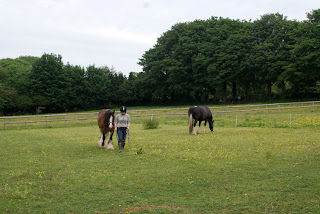 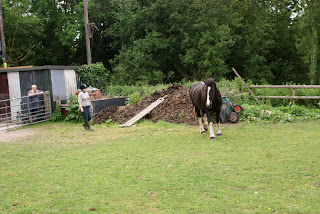 One of the hardest things to do when sharing a field with a more dominant horse is to get you horse out safely without interference. The art is to be able to use body language on the other horses without upsetting your own horse. For the owner of the dominant horse it can be equally frustrating to find out that other people have perhaps been using a whip or shouting at your horse and, if anything, making it more aggressive. My last call of the day was to an owner who has two horses where one dominates the other and has taken to moving the mare away from the lady that rides her and then intimidating the lady too.

We worked on using effective body language to ask the larger of the two horses to stop, move away and to mind his own business, keeping it quiet and reasonable at all times but meaning it. By the middle of the short session, the lady was able to use very low key body language to stop the horse and ask him not to interfere which didn't upset the horse that she did want. In fact horses are very good at knowing which body language is meant for them and which is not. 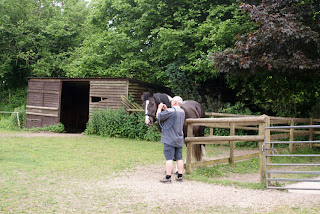 This was in fact my second session with this horse this week. When we met on Tuesday, the owner and I had worked on catching and grooming the horse. Three days later and the owner can catch him in the field using clicker.

They say that routine is good for a horse (I don't necessarily agree) but this horse has been slowly establishing a routine that his owner had to adhere to meticulously in order to get him in to the yard, catch him and eventually brush him. This entailed persuading him to follow a bucket, allowing him a certain number of minutes to settle and eat, having his head collar on and then having more minutes before he would be brushed. Bit by bit the horse has been getting worse and the required procedure even longer. Looking at it, I could see that the horse was ambivalent about being caught and brushed and was trying to say something to the owner about the way he was being approached and touched. In fact, he wasn't just saying it, he was shouting it as loud as he could.

It seemed to me that there was an awful lot of tickly touch going on around the horse's nose and then with various brushes. The more he fidgeted and complained, the more tentative the owner got and the more irritated the horse became - to the point where he will either leave if he isn't tied up or half rear if he is. Further investigation showed that a deep flat touch with a good hard dandy brush was what he wanted and then he stood still and became sweeter and sweeter. There is so much tickly touch going on around horses and I wonder why we do it. Certainly if someone touched me that way I would scream and probably hit them because I have sensory perception dysfunction but sure no-one can enjoy having their face meddled with and being tickled with a soft brush (don't answer that). Honestly, go up to the next person you meet and start tickling their face with your hands and while you're at it, give them a mighty big pat. No doubt we'll see one of you in court. 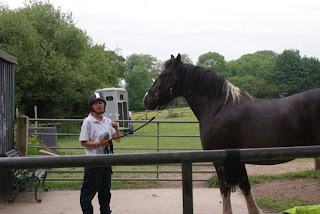 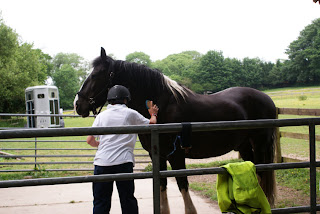 Email received 25th June, 2012: "C-horse is 100% better with his head collar but still not 100%, I can now bring him in from the field, albeit a little reluctantly.  Charlotte is able to get T-horse in, C-horse still gives her "black looks" but is not overly threatening.  We are working with your excellent advice and he is getting better." JS