It's very easy to get caught up in the bitted-v-bit-less debate or the barefoot or shod debate, and I have always tried to keep an open mind about all options. The trouble with marrying an idea is that it is hard to see a way out sometimes and stressful to get a divorce! A long, long time ago, when Petra was originally started, she was ridden bit-less either in her Dually or a Spirit Bridle which was very similar in operation to a Dr Cook. For a while when she was quiet and innocent things went well but after a few mad gallops, and an ill-advised colt-hunt, she got in touch with her racehorse heritage and started to rev up. When she wasn't allowed to run off, she leant on the noseband of the bridle. This pull-pull situation culminated in the over-development of her brachiocephalicus, the muscle under her neck.

When I eventually introduced a bit, it was too late to correct her muscle development, but at least she was under control. No amount of training would teach her to soften to the bit in anything but walk, and she had the stamina to argue about it for miles. I tried all sorts of bits, mouth-pieces, cheek-pieces and materials, before Hilary Vernon steered us quite literally towards a Myler Combination bridle which at least had the courtesy, in Petra's eyes, of asking her nose first and then her poll before putting any pressure on her mouth. Not only that but the sweet-iron tasted nice. Once I felt that she understood what she was being asked, I tried to replace it with a Myler Low Port Comfort snaffle - same mouth-piece on D rings giving a very similar action in the mouth, but she detested it because it was made of stainless steel and not sweet-iron. Back to the drawing board and David altered a Combination bit so that it had no nose-piece and no lower curb ring but no, that wouldn't do either. The full Combination seemed to be the only bit that she was prepared to talk to and which kept me, and her other riders, safe. Nevertheless I hate the thin 'noseband' part of it, and the sharp action that it could give if misused. Fortunately all of her riders have ridden her on a tiny contact and even a loose-rein once the first ten minutes of a ride are over.

Now that we are all getting older, including Petra, who is now 19, I have decided to see whether we can go back to a bit-less since we only tend to plod about the place and certainly don't gallop anywhere. Too many old bones to break and Théoden needs a bit of nurturing too.

I have been concerned about the action of some of the standard hackamores, and despite a lot of strong support for it, the Dr Cook bridle which crosses over under the jaw and therefore asks the wrong side of the head in my opinion. I'm not keen on Scawbrigs as the operate in the underside of the jawbone. This left with me with the Micklem and the Orbitless to try. 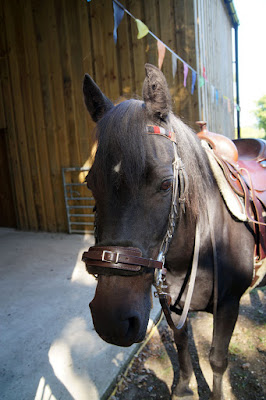 Yesterday Petra went out in the Orbitless and looked happy with it from the outset. I have it slightly higher than some of the promotional photos show and I have put sheepskin under the jaw, as well as over, as the leather which is really good quality, is quite hard - some oiling required! Our latest riding acquisition, little Liz, rode her and apart from the Incident with the Heather - you need to answer her question, not her decision! - she went extremely well in it with the same level of contact as normal. 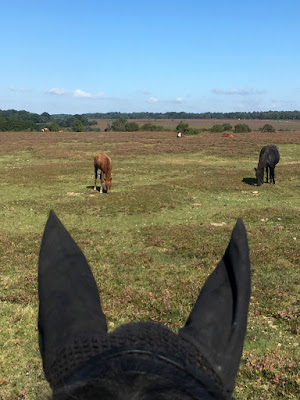 Bella is going well too and is much happier now that she can wear a bonnet. Those nasty midges make her itch. 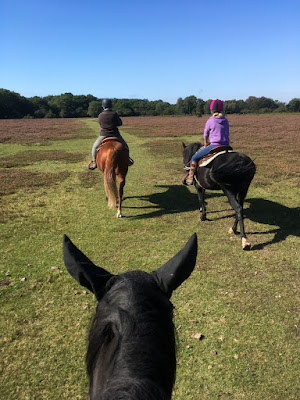 I shall try Théoden in the Orbit-less next - he seems quite settled and soft in the rather agricultural looking Rocking S snaffle. This again is a sweet-iron bit with a little lozenge in the middle and cheek-pieces that don't affect the bridle cheek pieces when you ask for something. I tend to leave his mouth alone most of the time so a bit-less may work just as well.