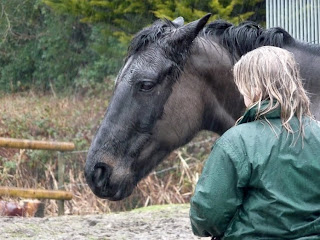 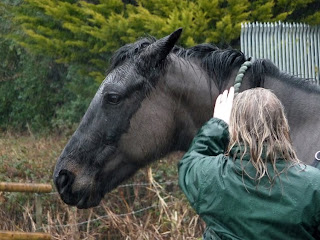 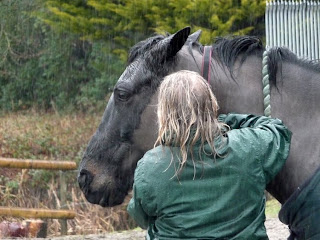 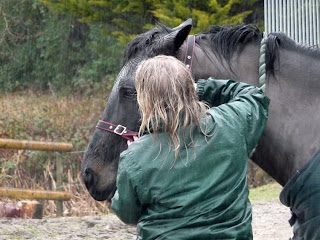 After a further 12 months bringing Talin on, Cat finally decided that she wanted to sell him. Although she had begun to ride him again and was getting on very well, she felt that she just didn't have the time available to commit to what was a very sensitive and athletic horse. She sold Talin via projecthorses.co.uk giving the lady that bought him a full account of what he had done and the problems he had had in the first place. That lady is also an IH member and will get help whenever she needs it from her own local RA. She is doing the courses as well so Taliln has truly landed on his feet and is all set to continue in the right direction.
Meanwhile, Cat has bought this beautiful boy. He is apparently great to ride and only has a couple of issues to deal with. The first one is catching. Almost as soon as you walk into his field, Tracker is off and despite using careful body language, he is adept at maintaining the same distance between you. We brought him into the smaller paddock (still not that small!) following his little friend Pickles and then worked on using advance and retreat to catch him. Cat has already got the broad principles and concepts of the IH approach - pressure on, pressure off and so on and today it was the tiny bits of technique that we needed to look at. How to make sure that you are in the right place at the right time, mirroring the horse and accidentally turning up at the place he is heading to. How to use touch and move away to get permission to touch him and to ask him to stay and how to out the headcollar on without flicking the crown piece over his neck. By the end of the session he was being caught even though he looked apprehensive about it. I strongly suspect that he has been chased and grabbed previously and he has learned that it is best to stay out of the way. He also has a bit of a wobbly clip around his head and I wonder whether he had to be restrained for that. It was great to see Cat catching him and the way he moved in for her as soon as he felt he could commit.
Should point out that it was absolutely chucking it down with rain.
E-mail received 21.1.10: "Your technique seems to be working Saturday afternoon I was able to go up to him in the bigger field and give him a rub - amazing!! It also only took me about 10 mins to catch him Sunday morning, the pressure and release technique works a treat! Each evening I have also been putting his headcollar on and off 3 times. Thank you so much." Cat
Posted by Loisaba Wildlife Conservancy at 3:02 PM