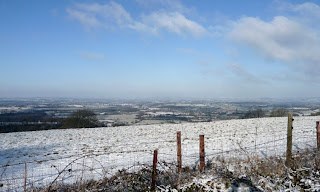 I have had my hands too full over the last couple of days to be able to take any pictures of the horses so this photo taken from Bulbarrow Hill is the only proof I have that I have been out at all.

Yesterday it was off to meet Ruffy, a three year old Thoroughbred x New Forest who has been getting a bit feisty around his food. Perhaps because he has inadvertently become the herd leader (his companions are a foal and a two year old), he has grown to believe that he has the right to take food off people as well. We worked on this specific problem, establishing body space and making sure that we moved him and he didn't move us, as well as doing some basic groundwork stuff. Once the food was out of the picture he was actually a very polite boy and a quick learner too. With this weather who can blame them for being so attached to their food?


This morning Julie and I went to load a 15.3h.h. mare called Moose as she was moving from the loan home back to her original owner. With the tricky conditions we had to find a safe place to load and we took the precaution of covering it with straw too. Although she is 9, I don't suppose Moose has ever been taught to load and I heard that on one occasion she had been loaded by the army who practically carried her on and on another attempt, a lunging whip had been used - that is standard BHS practice as described in their training manuals and people don't see anything wrong with it but this is the surest way to teach them to run backwards. Moose has learned to run backwards once half loaded but with the aid of the panels and a good long lead rein I was able to persuade her that she could come in and turn around in the box and get to know the place a bit. It was touch and go whether we would be able to close the ramp safely and it was only after she had gone through three periods of high adrenalin and high activity that she finally settled enough for us to give it a go. Fortunately it worked and I hope that this low pressure approach and a gentle journey will be the start of her changing her mind about the whole thing. In an ideal world, I wuold like to have stopped the session at the point where she was really relaxed to reward her for doing so but the costs involved in coming back another day were going to be extensive. She's a lovely horse and she was getting better all the time so I hope that she does get a training session very soon with one of my colleagues closer to her home.
Posted by Loisaba Wildlife Conservancy at 3:19 PM