A capacitor (originally known as condenser) is an electrical component used to store energy in an electric field.

When there is a potential difference (voltage) across the conductors, a static electric field develops across the dielectric, causing positive charge to collect on one plate and negative charge on the other plate. Energy is stored in the electrostatic field.
I often think that horses are capacitors. Put them in a stable at night, give them highly calorific, sugary food, or worry them in some way and they will store energy for a little while before it bursts out of them in an energy spike. How that expresses itself will depend on the horse. If your horse's behaviour has suddenly changed this winter have a think about what has changed and what may have put that extra energy in - is it more hours in the stable or a sudden change of diet? Something as simple as haylage rather than hay?

This morning I went to work with again. She has been ridden regularly for weeks now and she has been absolutely fine, already going out on the without a lead-rein. This morning, for 'no apparent reason', she started bucking as soon as she moved forward from the mounting block. Poor S hit the deck but fortunately the ground was soft and she was wearing a hat and body protector. We went back a few stages, long reining for a second time and then leaning over before S got on board for a second time. We took the precaution of taking just a few steps in a small circle before going in a straight line. All was well this time and we were able to go out for a short while on the . The good news is that was not frightened by S landing on the floor (some horses are terrified the first time this happens) and she recovered her equilibrium really easily. The only factor that has changed recently was the introduction of haylage as supplemental feed. So not for no apparent reason perhaps at all! 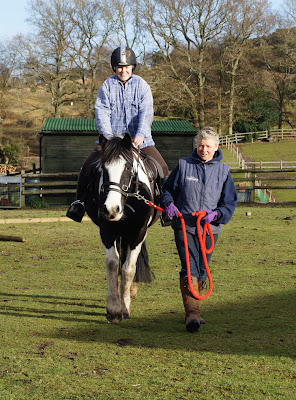 When you think of the effect that a small pill can have in preventing disease and changing body chemicals, it should come as no surprise I suppose that a change in diet can have a dramatic effect on a horse's temperament and energy levels. Needless to say, S is ringing the hay man this afternoon!
Posted by Loisaba Wildlife Conservancy at 4:04 PM