Back to work today starting with little Cassie who needs to go to the vets tomorrow to have her teeth treated. She has never been a good loader apparently and I am told that it took four hours to load her on a previous occasion. Today we set the panels up and had a little practice for an hour. Cassie went in less than five minutes and we rewarded her with feed every time she went in. By the end of the session she was happily eating her feed at the top of the ramp and she stood quietly with the ramp done up. Hopefully it won't take very long to load her in the morning and she will have a good journey. The track she has to go along is pretty bumpy but I know her owner's husband will drive like an angel (or he will become one!!) 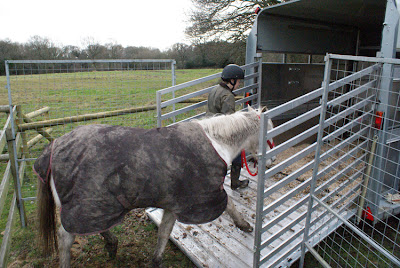 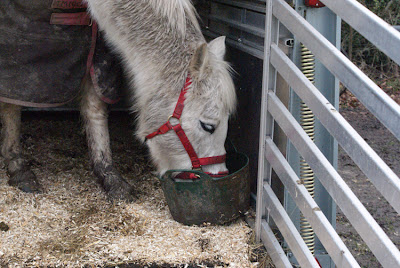 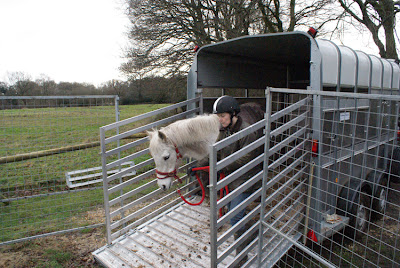 (P.s. 28th December - Happy to report that Cassie loaded without hesitation at 7.15 this morning and then again when coming home from the vets. Always worth practising with low adrenalin levels before a journey is required.)

Later I went over to Quob to work with Benji who now belongs to Hilary, the lady who has spent so much time taking him from wild to ridden in the last year. Benji seems totally unfazed about having a rider on his back but his favourite pace seems to be halt. Rather than using a whip, we have been working with visual and audible cues to ask him to move forward promptly. 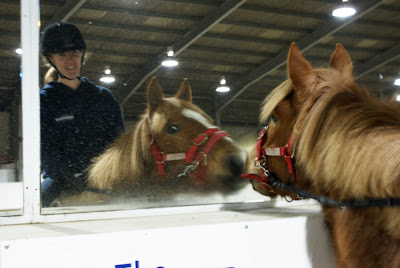 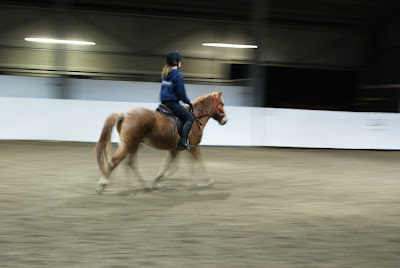 "Thank you so much again. Who would  have thought that I'd be riding the untouchable pony I met, almost a year ago to the day... and it would never have happened without you." HP

(P.s. 28th December "I took advantage of the empty, freshly harrowed indoor school. Wow... he did some thinking last night and I hardly needed the rope! We went all around, both ways, in walk and had a few trots and a couple of bucks and squeals!"HP