Most people are familiar with the four stages of competence which are illustrated in the chart below. Take learning to ride for instance, before you start, ignorance is bliss and it can seem that there is nothing to it. However, the first riding lesson usually highlights just how much there is to learn - indeed many people give up right at that stage because they think they'll never do it or they have a nasty experience and come off. As time goes by and the student has more lessons they move from conscious incompetence to conscious competence although most people recognise these days that they will always need (and hopefully want) to learn more. As it gets easier they slip into unconscious competence and this is the stage at which it is easy to forget just how hard it was to learn. As time continues to go by people tend to learn bad habits or their body doesn't function as it use to and therefore they may slip into unconscious incompetence all over again. 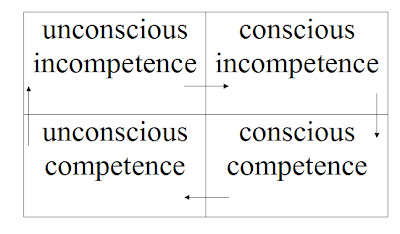 The point of all this, however, isn't just to remind myself and everyone else of this learning process, it was more to see how it might apply to the behaviour of horses. A lot, if not all of a horse's natural behaviour is unconscious, instinctive, unthinking behaviour. They just do it and they are just being a horse. Sometimes there might be an element of choice about how to react such as when a predator is so close that fight seems a better option than flight. It's when we are working with horses and asking them to make conscious decision that we need to be careful. On the whole we want them to choose the quieter, less reactive, less prey-like response - we want them to choose to stay with us when they are frightened, we want them to keep all four feet on the ground when they are not confident about going forward or they feel threatened in some way. Once a horse has reached the conscious level where he was the choice to do something instinctive or, the complete opposite, i.e. something that is counter-intuitive to him, we need to help him to make the right decision by making it easy. By asking too much or saying "you must" we are more likely to engage with his instinctive behaviour and to thereby reinforce it. Reinforce it just a few times and then you have conscious instinctive, where the horse choose to do the prey-like thing. Once that works, it becomes confirmed and the horse slips into unconscious but confirmed instinctive behaviour. In other works, he doesn't have to thing any more, it's just automatic whenever he is in trouble. 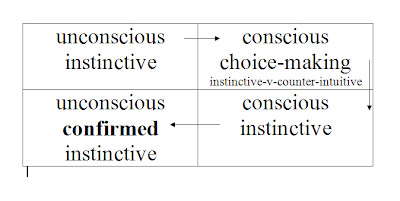 All horses know how to bolt - it's simply fleeing from a predator. When we work with a horse we need to offer him another choice and show him that it is much easier to stay with us when he is frightened. If a horse is punished in some way for being frightened then he is more likely to leave. That behaviour will give him an immediate and significant release from the pressure of being frightened and if it happens more than once it will be reinforced. Sometimes once is enough to confirm the behaviour but three times seems to be the magic number. So, if you horse has bolted at the sight of say, pigs, it is important not to say "Right! Well we'll go back and do that again!" because your prophecy may well come true.


Posted by Loisaba Wildlife Conservancy at 11:51 AM