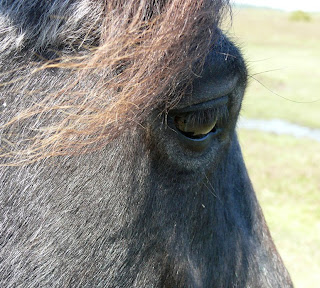 I often think about rational versus emotional in our treatment and training of horses. Many of the people I meet are very emotional about their horses - not just joy, happiness and sheer excitement about having them but negative emotions such as disappointment, frustration, and anger when things aren't going right or they fear failure. I often say, leave your emotions at the gate as they won't help and will almost certainly hinder. You can pick them up again on the way out if you want to - but you might find that you don't. Before this sounds like a sermon, I will tell a story against myself. Petra has only just come back into full work for a variety of reasons. Instead of starting off a few steps back from where I left off, I decided to ditch the clicker training that has worked very well in stopping her rushing and to be more forthright about owning speed, direction and destination. Forthright is a euphemism for cross and not only am I ashamed of having got cross with her, but, three weeks later, I am still having to put things right because that cross-ness reinforced everything she has ever believed about humans and made her want to go home even more. (I am back to clickering her every 50 strides and on Saturday, she only rushed for 1/3rd of the ride rather than 1/2 of it - basically the bit where we were facing home!).


Negative emotions get in the way of rational thought and our ability to work things out so that we can make it easy for the horse to do the right thing; the make it more likely that we will punish rather than using measured pressure and release, more likely that we will forget to reward the instant the horse has done the right thing. They affect our patience and our ability to be in the moment with the horse. I went to one lady who was really worrying about the future and lamenting what had happened in the past to such an extent that we struggled to talk about what was actually happening now and how we could train incrementally from there.

I am sure it is harder with your own horse as we are more emotionally involved with them and at risk of feeling slighted or rejected when they don;t do what we want them to do. I often say, if love was enough there would be no behavioural problems at all.


I think positive emotions can help training if they are used to notice, release and reward the instant the horse gets ot right. Instructions need to come from the head and rewards, of whatever kind, from the heart - literally, heartfelt. A lovely rub or a "goooooood booooy", or, like in Harry met Sally, yes!yes!yes!!!!

By the way, the pony in the picture is Blue, and she would like to point out that she has never driven me crazy. How could she?
Posted by Loisaba Wildlife Conservancy at 9:50 AM