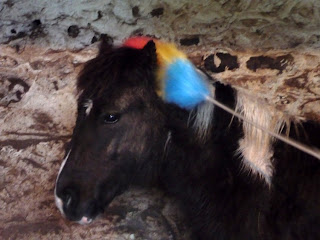 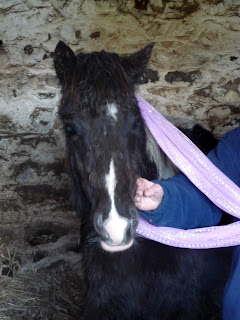 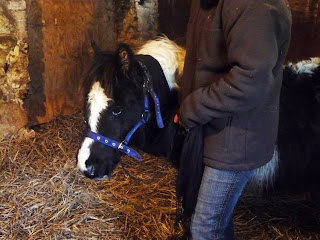 I slept with Jenny for the first time last night - she had the top bunk and I had the bottom bunk, taking me back to when I was about seven when my friends and I would lie awake giggling nearly all night. Jenny and I were staying with Tabitha and George at Chard where we were training their two Bodmin Moor colts, Magic and Merlin. Thank goodness that they didn't turn the telly on an hour later or these beautiful ponies would be called Anton and Brendon!
Both ponies were tricky, through no fault of their own, and I was very grateful that I had Jenny with me to double the amount of training that we could do. Having started life in Cornwall, the ponies have made their way through the sales to a local dealer who has about 40 for sale and I don't suppose that any of their previous handling had been very sympathetic. Even the cat jumping down onto the roof of the stable frightened the living daylights out of them and we had to back track quite a way to build up their confidence again. Nevertheless, by the end of today Magic (7 months old) had his headcollar on and off seven times and Merlin (14 months) was being led using a pashmina! He will need a lot more touching before he will accept a headcollar easily but he was enjoying having his neck and back rubbed and his face stroked very gently.
Posted by Loisaba Wildlife Conservancy at 8:45 PM