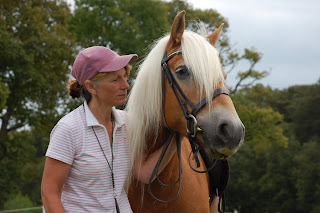 Yesterday our Christmas plans were interrupted by a beautiful blonde called Tequila. Sarah, her owner, had brought her down to the New Forest so that she could ride out with her daughter in Christmas day but unfortunately, when it came time to go home, Tequila was adamant that she wouldn't load. The little trailer on which I normally store my panels was full of firewood and so we had to barrow that all down to the house before dashing up to Fritham to pick up the panels. We arrived Sarah and Tequila in just over an hour and loaded her into the horsebox pretty quickly. Despite looking relatively calm, Tequila's bottom lip was pretty tight and once in the box, with the partition closed, she began to rear. I felt that it would be better to travel her loose with the partition pushed all the way over to the wall so we took her out again and rearranged everything. She loaded readily this time and was fine while we closed up the ramp and the top door. She had a good journey home, being able to spread her feet out and stand like a table. We went off to Bournemouth and got some thermal lined curtains in the sales.

From Sarah: "Your presence yesterday, helped us all so very very much and I can't thank you enough for abandoning your plans for the day to come to our assistance. Of course getting Tequila in the box was the ultimate goal, however, so much more was achieved. Your communication and handling skills with all of us, horse and human, ultimately, put us all at ease.

Tequila traveled home calmly, mostly choosing to stand facing the rear of the box, however Gem tells me that she did turn and have a look through the cab window before turning away to munch on some hay.

When we all arrived home, it was me who was drained and shaking, our pony was as cool as a cucumber. I climbed through the back door, gave her a hug, clipped her onto the lead rope, gave Steve the thumbs up to open the door. Tequila stood by me, had a look to see where she was and waited for me to lead her out and home. Thank you so much, both of you. You've done so much more than just load our lovely pony!"