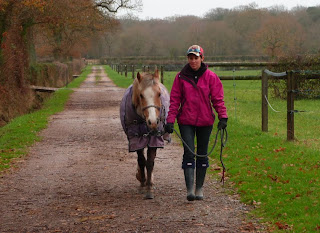 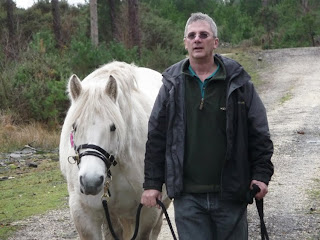 Custard (top) and Arnie (bottom)
As well as the bay baby thing there has been a leading thing going on this week and today it was the turn of Custard and Arnie. Custard has only just arrived with her new owner and seems to be settling well. However, when she wants to move Kerry out of the way, she simply bunts her (very hard) with her nose. As well as asking her to stop that, we worked on asking her to be "with" Kerry rather than having her attention everywhere else.
I have worked with Arnie and his owner Wendy before. He's a very calm and solid Highland pony and would have made a police horse had his legs not been so short! Today it was the turn of Wendy's husband, Barry. The idea was to make sure that we had some level of consistency between the two of them so that Arnie knows, almost literally, where he stands - in a nice way. I also wanted to get them both to leave his nose alone as this sets of his need to nibble and demand attention.
I have seen endless horses that have been taught to nudge, nibble and mess by people who play with their noses. It irritates the life out of them and in the end they have no choice but to develop a strategy to get people to go away. The other good way to teach a horse to do this is to hand feed them - especially if you do it intermittently - so that they learn to demand food. Once a person becomes a food slot machine, the horse becomes a gambling addict.
Posted by Loisaba Wildlife Conservancy at 5:20 PM