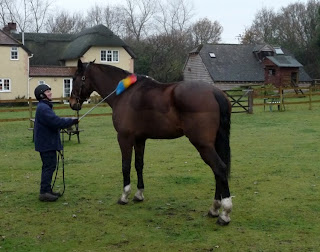 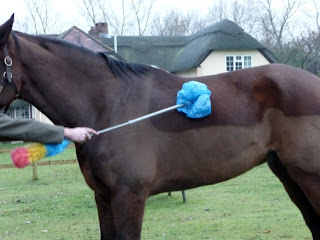 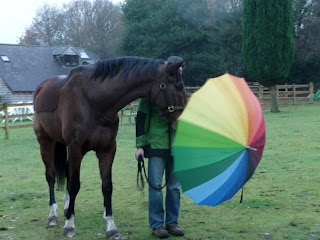 A few weeks ago, Guy the farrier came to trim the horses and had a decided limp. Not a little limp, a really big limp. He explained that he had an involuntary dismounting incident from his horse, Money Spider. Now, Money Spiders may be small but this one isn't, he's a 17.2 hh Warmblood. You'd think that Guy would have had time to do a triple toe loop on the way down before he landed on his feet. Anyway, I offered to spend some time with Spider to see whether there was any desensitisation work that would help him to be a bit less spooky.

Spider put me in mind of Amarosso, the 11.2hh warmblood in a 17 hand suit that I met in Tanzania. Like Amarosso, it appears that Spider has been hit quite badly at some stage in his past and he is terrified of anything that looks remotely like a whip. Although Guy doesn't even carry a whip, this fear gets them both into trouble from time to time.

As usual I started off with the feather duster before Guy continued with a plastic bag on a stick. By then Spider thought this was all old hat. We then worked with the umbrella and the tarpaulin which Spider tackled with great courage before allowing me to touch him all over with a whip. I wouldn't normally use a whip to desensitise a horse unless I know for certain that one will never be used on him ever again - I maintain that is not fair to desensitise and expect a horse to be sensitive to the same object.

He may not become a police horse overnight but I am hopeful that this and further work will help Spider to get over his phobia.

"Thank you very much for the time you spent teaching both me and Spider, we both enjoyed it. Hopefully, it will prove to be a good base from which we can move forward, literally! I have to say that I was most impressed, something I will pass on whenever I get the chance." Guy Reynolds
Posted by Loisaba Wildlife Conservancy at 7:19 PM