14th May, 2010 Bronco and Bouncy together again 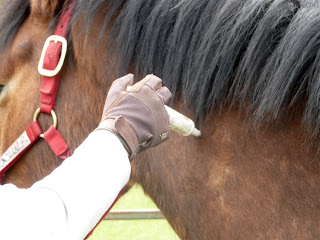 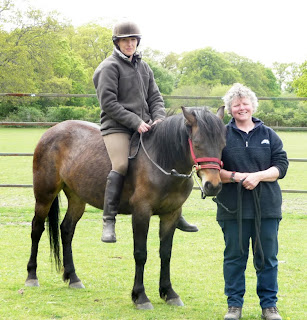 Jenny and I have agreed that we shall go in to the same nursing home when we are old(er) so that we can talk horses all day. I'll have to wait a while as Jenny is five years younger than me. Our nicknames will be Bronco and Bouncy (don't ask) but I imagine our conversations going like this....."Do you remember that Tamie Jones?", "Oh yes, didn't he sing Delilah?", reply "no, I prefer roses". We haven't been drinking!

After his loading this morning, I worked with Oliver to get him over his understandable needle phobia using clicker training. He was delighted with the whole idea and was soon following me about asking me to "inject" him with the needle-less syringe. We have sent the pictures to the vet.

Later Bronco and I worked with Flicka and she was backed again. She didn't seem to mind at all and described small and then large circles in the round pen. Jenny does look big on her but then she has very long legs. She is still very light. Flicka fell asleep when we took her photograph.

With ponies that have a little edge to them if they feel under too much pressure, it is even more important to go slowly and I try to work to just 75% of their capacity rather than accidentally go to 101%. That edge will have developed in the first place because something was done without sufficient empathy or time for whatever reason, for example, a medical emergency. Rather than put them in the position where they feel they have to really shout and escalate their behaviour, I prefer to just keep things very short and small if necessary.
Posted by Loisaba Wildlife Conservancy at 6:15 PM