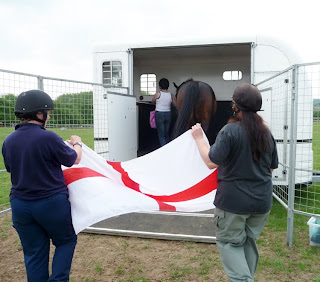 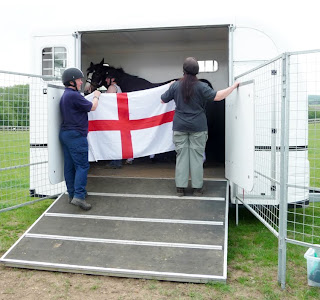 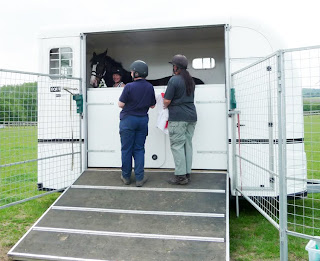 I don't mind admitting that I was at a loss as to how I was going to make progress with Mars. Although he would load, he just wouldn't stand on the horsebox for very long especially when he thought that the doors might close. Working on the basis that fabric works so well with the semi-feral foals, probably because they can feel that it can't be used to force them to do something, I finally came up with the idea of using a white flag as a "barrier". Amazingly Mars didn;t try to breach it even though he pushed it with his nose. He certainly wasn't afraid of it as I had touched him all over with it before we began to work. Once he was accepting the barrier, we were able to close the doors behind it and he just stood there very very calmly and took his clickered treats off Jane. All this time and patience has paid off and I am hopeful that we can put the ramp up next time.
E-mail received 26.5.10:
"Had a loading session with Mars yesterday evening. He is now totally focussed on the treats/nuts in the bag and practically runs up the ramp and seems happy to stand in the trailer, even when Kevin walked up the ramp, then walked up and fiddled with the door, and finally closed one door up." Jane
Posted by Loisaba Wildlife Conservancy at 9:08 PM