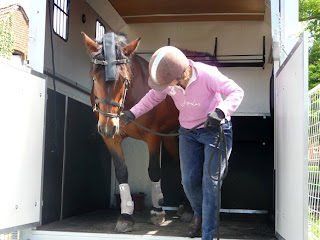 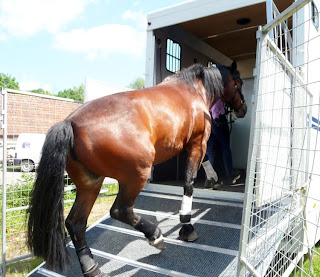 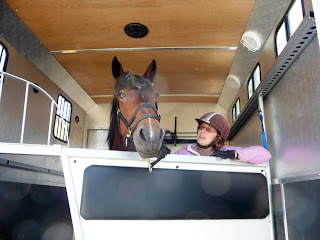 This morning it was off to see Lola. I initially met her well over a year ago when she was refusing to load in to a trailer. Since that visit she has been loading regularly and going off to all sorts of events albeit that she always needed a quarter rope around her hindquarters. Her owner has now bought a rather nice lorry and was dismayed to find that although Lola would load, she appeared to be frightened of staying in it.
Here's a record of what we did today and how it went:

With the panels in place in a wide L-shape, I started to work on loading Lola taking a fairly standard approach. Although she was initially reluctant, she soon began to offer to move forward step by step, sniffing the ramp and putting her front feet on it. In a little time she consented to putting her back feet on and then loaded fully. We spent the rest of the session changing things one by one - moving her around; pausing in the corner and at the top of the ramp; encouraging her to unload slowly and with her head low; removing the panels and then introducing the back doors and partition. Throughout the session, both Lola and her owner remained calm and quiet - even when the back ramp went up. Overall a copybook session. Interestingly we didn't have to use a quarter rope once.
E-mail received 30.5.10: "Good day today, loaded her straight on lorry, drove for 10 minutes to plain then went for ride. Came back to lorry, she walked straight on and we drove home.
How fab is that? Did not even need Dually or lunge line, just normal head collar."MH
Posted by Loisaba Wildlife Conservancy at 8:08 PM