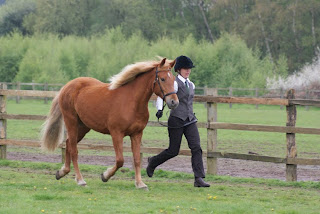 Jenny's Mum's pony, Poppy, was taken very ill within 20 hours of this photograph being taken at Manor Equestrian Show where she came second in a strong class of natives. Jenny suspected Atypical Myoglobunuria the instant she saw her and called the vet straight away. Poppy was rushed to the veterinary hospital and is still on a drip three days later. Once again we are holding our breath and crossing our fingers that she makes it.

This disease is a bit of a mystery and nearly always fatal mainly because people don't often spot it early. There is more information on this website: http://www.myopathieatypique.be/

- Pasture with a history of previous death(s) of horses

- Pastures on a steep slope

- Pastures where a stream/river flows across or around

- Pasture in a valley or depression

- Pastures with accumulation of a lot of dead leaves

- Give only access to dry and lush pastures during the seasons at risk (i.e. autumn and spring)

- Once a case of atypical myopathy has been confirmed, the field should be banned for pasturing at least during autumn and spring.

Update 9.5.10 - Poppy is still recovering at Endell's. Her enzyme levels are coming down although her heart rate is still too high. Everyone is hoping that she will suffer no long term damage to her liver or the muscles of her heart. The mortality rate with this disease is about 88%