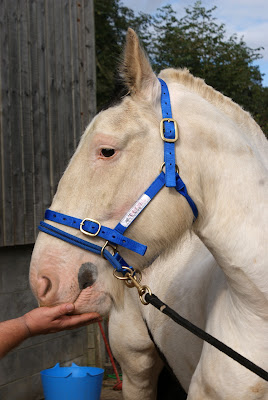 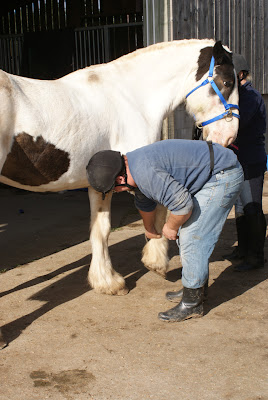 This Irish Cob is extremely fortunate to have fallen into good and intelligent hands. He's a 99% horse in that he is fabulous to ride and at only seven, a real confidence giver to his rider and other horses. Yesterday he went to a sponsored ride where he led the way for several other horses. However, he has a really big issue with having his feet handled and has developed an impressive range of strategies to deter people from picking them up, let alone picking them out or putting shoes on. He had to be sedated by the vet to have his last set of shoes taken off and the owner and I suspect that he didn't meet nice treatment when he had them put on in the first place. With a horse like this, there is only one route and that is under the radar. Since his strategies include pulling his foot away, striking out and stamping his feet down, there is no way that I could use my strength to make him keep his foot up.  His owner has put his back out trying to do exactly that. All that holding on to his foot does is help him to practice his 'no'.

As his owner was already using food to persuade him to pick his foot up momentarily, it was an obvious choice to use clicker to continue with that work in a more accurate and disciplined way. At the same time I did use some negative reinforcement, body language of the gentlest kind, to ask him not to strike out and, because he is normally well mannered, it worked to some extent. It was lovely to see him start to make decisions about what he was going to do rather than just reacting without thinking. The noise of the click was useful to distract him just as he thought he might take his foot away or waft it about energetically. I this way we progressed from him picking his foot up momentarily to his owner being able to hold up the foot for at least 5 seconds. It's going to be a matter of working incrementally and patiently for some time but his feet aren't too bad and he is managing barefoot for now. That gives his owner plenty of time to do the work it will need. His owner now has the title 'Pete the Feet'.


"Thank you so much for today.  It all made perfect sense. We are prepared to put the effort in and now that we have a "plan" can set aside some time do that we can help him overcome what awful things he has experienced in the past." NC 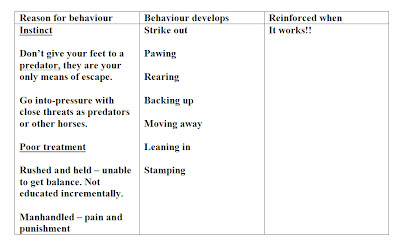