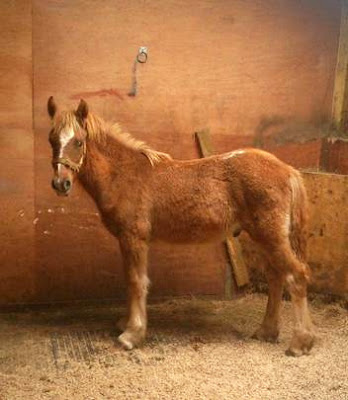 Recently I have been contacted by Dee who bought a 4 ½ month old Quantock Hill Pony at the Quantock Hill Pony Fair. She bought a copy of No Fear, No Force and later contacted me to ask  whether an over-handled foal would turn into a bargey horse. She went on to say, "He is fine to catch and get the halter on in the stable, both undoing the halter and laying it on his back like you suggest in the book, but slightly less relaxed if I put it on over his nose, but in the field the grass has much more allure."

I replied that, "He will only become bargy if he is over-handled without any boundaries - so as soon as he is pretty confident, start to get some rules in. Yes, it will do him good to be with other horses so that they can set some boundaries too and you don't become the entertainment committee, but there is nothing wrong with handling him if you are consistent and fair. Obviously don't over-pet or give him attention on demand.

If you want to give him food in the field for catching him then try hand feeding a small amount of food but making a click before you give him any food. I think he's probably not ready to be caught in a bigger area yet and you might just need to slow down a bit. In time it just won't be an issue - you'll know when he is ready - if there was somewhere in between sizes that would be even better."

Today I got this email from her:

Thanks so much for that advice about the smaller field.  I spent two sessions in the stable sort of clicker training him with his food to put his nose in the head-collar and I repeated this several times when he was turned out in the courtyard in front of the stables, and then again today in the bigger field and he is now perfectly alright with having his head-collar on. Phew!


Titch has been out for a walk each day for the last five days now. We were passed by a bin wagon with its flashing orange lights kindly turned off, but Titch didn’t even look up from munching!  Totally not bothered! We went to a nearby house-build today and he touched all sorts of new things with his nose and walked over some plastic that I then dragged home with us. All was taken in his stride. He is REALLY showing up my grown-up horse!"

I am always happy to give an after sales service for my book. If you would like to read more about Titch go to Dee's blog - http://quantockhillpony.blogspot.co.uk/