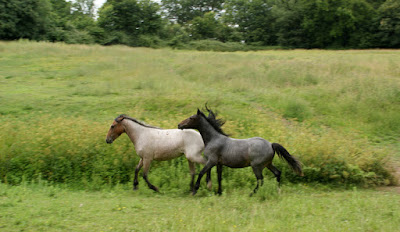 First day of a two day Handling the Wild Pony Course at Lockerley. Our ponies were four year old Posh Bird and her fieldmate, yearling colt Sardine, nephew of Mussels and son of Lovelyhill Highjack. Both have been in off the Forest for some time but neither has received any training. 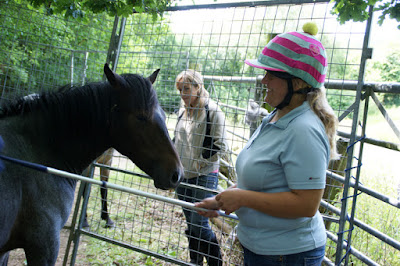 Sardine proved to be very confident, happy to be touched from the outset, and very aware of his testosterone. Rather than dodging his feet, we were dodging his teeth as he seemed to want to hold everything and everybody. 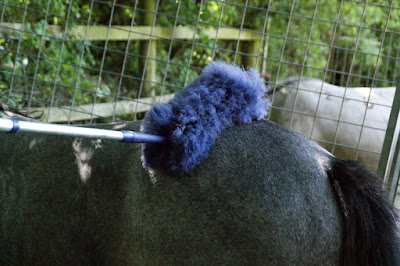 The feather duster was nothing and we were able to move on to touching him with a hand more or less straight away. 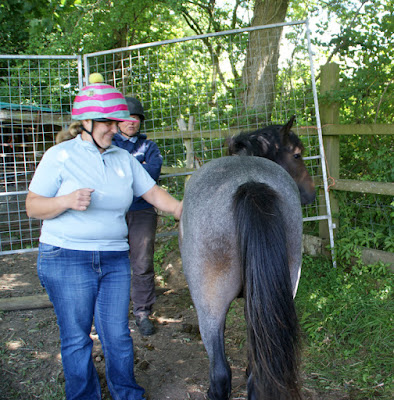 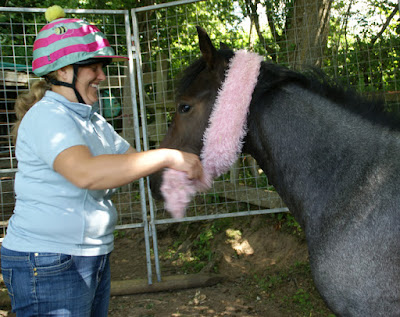 He also accepted the headcollar readily... with Sarah going first. 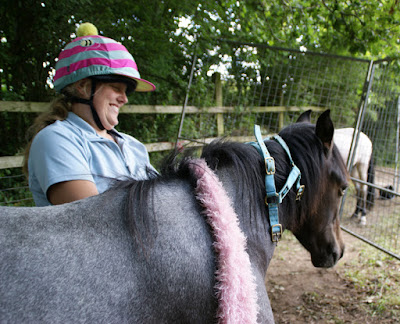 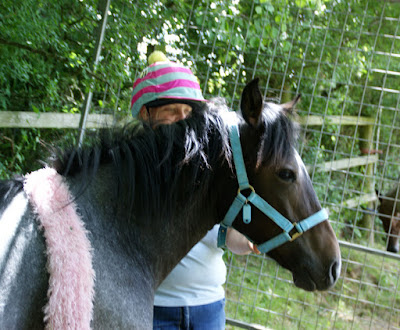 We'd already taught him to lead using the scarf around the base of his neck so that leading from the headcollar itself was nothing at all. We've been experimenting with a little Mark Rashid technique, using a light pressure to ask him to follow (remembering that he is likely to have an into-pressure response at first) but imagining that we are pushing the scarf towards him - the amazing result is a much softer response. 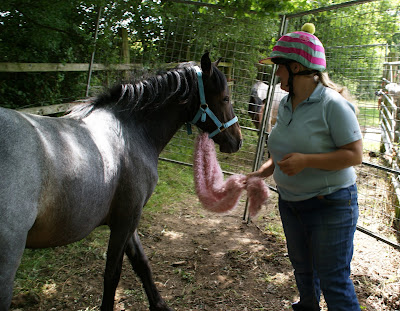 Emily then takes over, repeating the work and consolidating it. 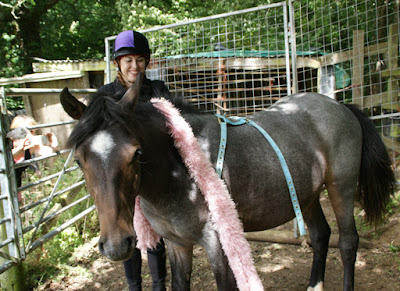 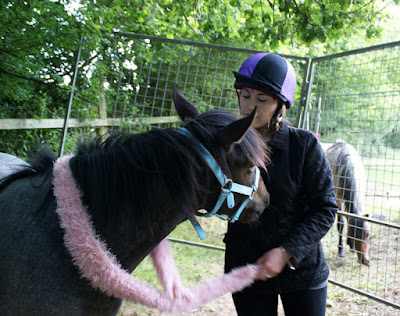 Posh Bird was a very different kettle of fish. Far more responsive and sharp and not at all sure about human touch. 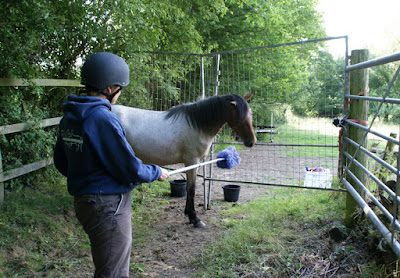 The same approach, taken much more slowly, worked really well and once she realised that we could help her to get rid of the flies, she was willing to allow us to touch first with the feather duster... 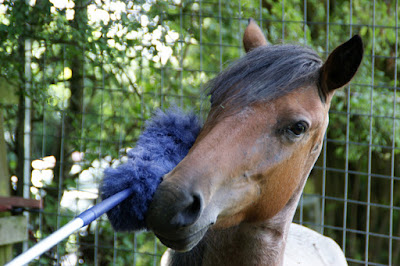 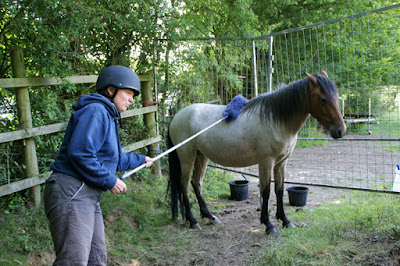 ...and a little later with a hand. You'll notice that she is inclined to offer her right hand side at this stage. 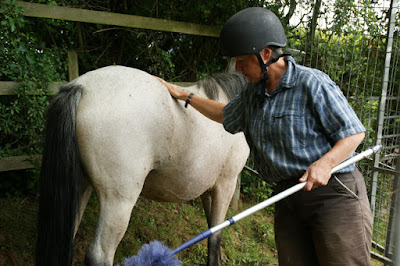 Sarah took over from me and was able to extend the range of the feather duster, down the legs and even under her tummy. 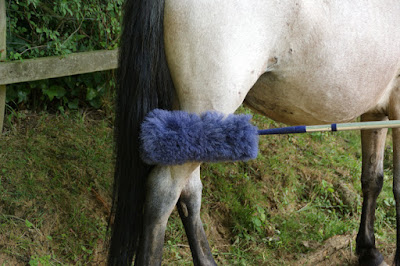 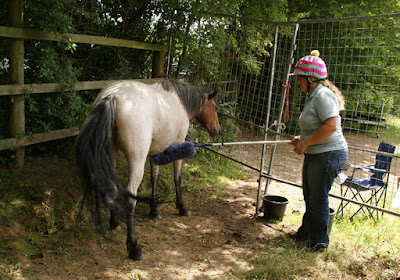 Then it was time to touch with the hand again... 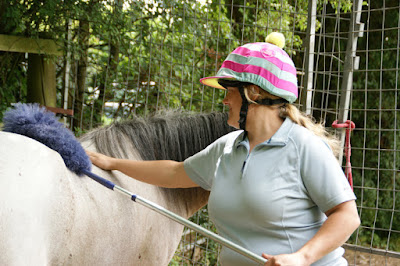 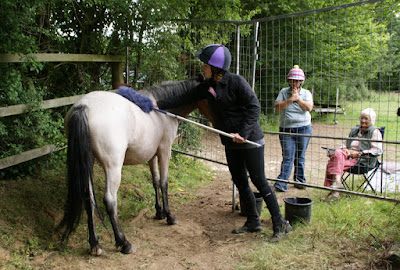 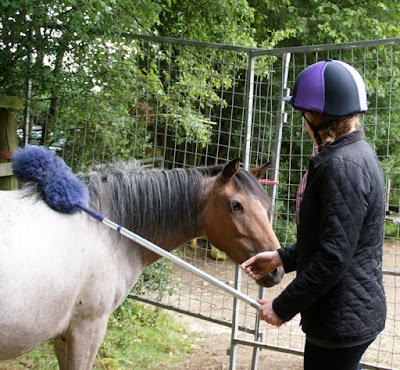 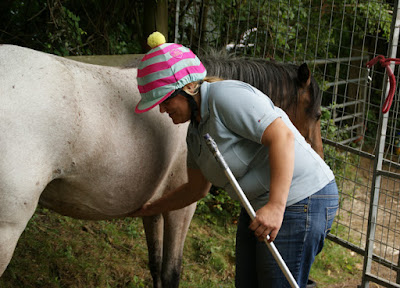 We finished the entire session with Emily and Sarah on opposite sides relieving Posh Bird of all the annoying insects. 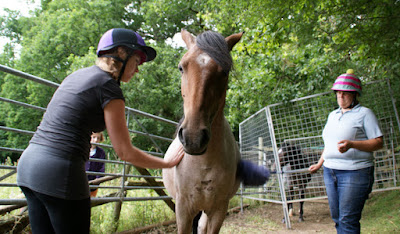 She seemed a lot more relaxed by now... 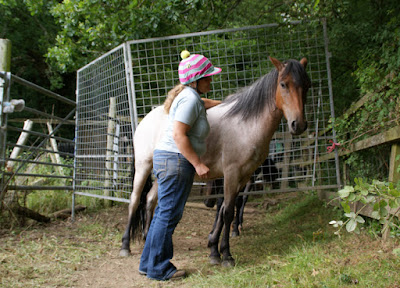 ...so that I was able to apply some cream, at body temperature, at various sore spots on her skin. 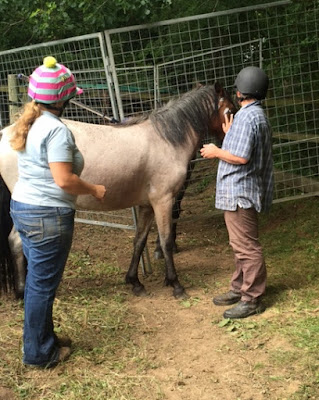 It's so useful to have two such different ponies to work with so that we can work with one while we rest the other and then swap over again. In that way latent learning is magnified so that both ponies had made brilliant progress by the end of the day. Even better, students Sarah and Emily learned a massive amount in one day. Working with a raw horse is a valuable experience for working with all horses.


"Thank you so much for today. It was excellent!." SB

"Thank you very much for today. Emily had a great time and we have fallen in love with Sardine." LN