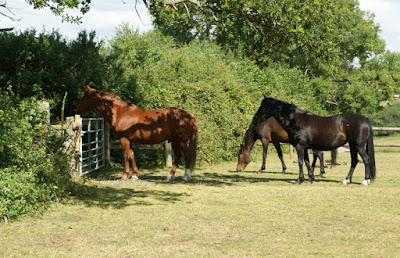 Arrived at the fields today to find the riding horses doing their best Stubbs impression. I think they were wishing the gate open. 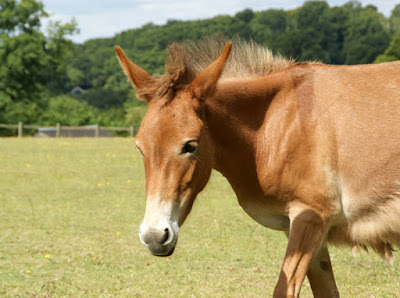 I had the dream team with me again and a good opportunity to see if Henrietta could cope with three people around her at once. 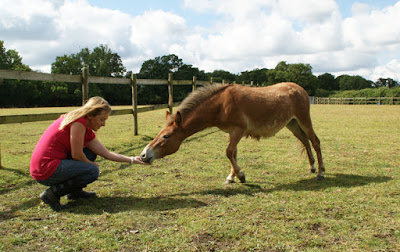 In a two acre field she chose to come up to each of us in turn to accept her head being touched in exchange for a click and a treat. 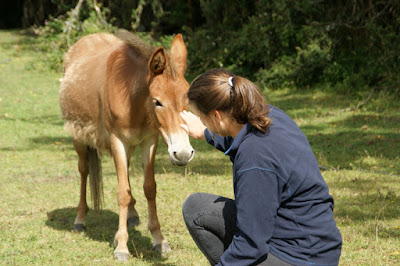 It was good to see that her hair was standing on end again after yesterday's downpour.


First customer of the day and we appear to be measuring Copper for a suit. Jackie was keen to see if he had been losing any weight but he was finding it hard to accept the weight tape probably because it is white like her electric fencing. This seemed to be a good place to start with desensitisation techniques.


I work with clients to show them three definite and deliberate techniques so that the horse can start to recongnise a reliable pattern of  dealing with new things.


As a result we work not just on what the horse does but how he feels about it.

Copper said he couldn't possibly walk over the tarpaulin no matter how narrow we made it.

Next stop Awbridge where New Forest pony Tilly was becoming more reluctant to load even though there were lots of people keen to give the benefit of their advice. Owner, Bev, had been practising with food a few days before we went there and that seemed to have solved her problem. 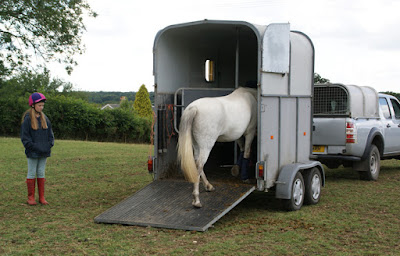 Instead of cancelling me she asked me to work with Tilly and her children to establish a fall back position in case it went wrong again and to help to analyse what was triggering the behaviour in the first place. 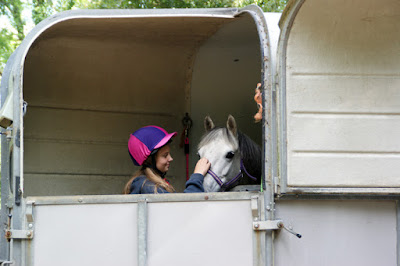 Children, like Arabian horses, are very quick to pick things up and with the help of Tracey as a 'difficult horse', F and G, learned how to use a 'smile in the line' and a 'bicycle hand' to gain more control of their pony's feet. This meant they were less likely to be dragged off the ramp or off to eat some grass. 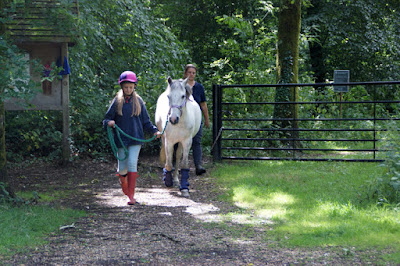 We took Tilly out to somewhere new to check that she would still load somewhere else. She went for a short walk before being asked to load again which she did very easily. 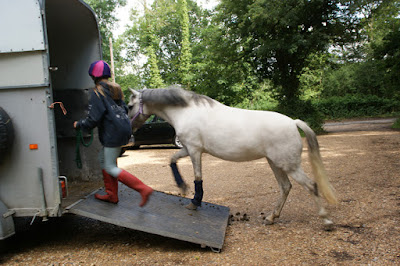 However, back at the farm she said that she didn't like to load with the other pony in first and the partition straight. This gave us a chance to work on the difficult loading that Bev had encountered before and once again food, in the form of clickered treats this time coupled with gentle pressure and release, helped to get her moving again. 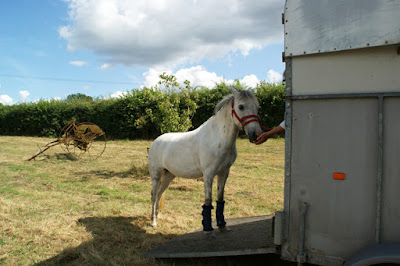 The best solution of all though was to go with her preference and allow her to load first with the partition wide open at the back and a bucket with food ready to reward her. Incidentally she isn't frightened of the other pony who is an absolute sweetheart. 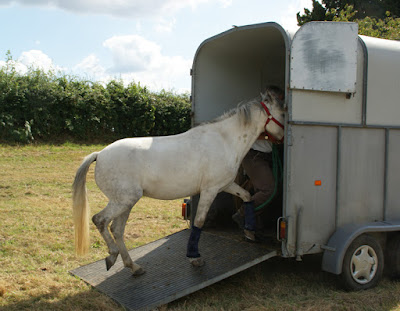 Email 4.9.15: "Tilly loaded 1st time there and back from her 1st competition it was so stress free!" BH

While we were there, Bev mentioned her Welsh Cob cross New Forest that she had bought as a four year old from Beaulieu Road Sales. Like a lot of the ponies that turn up at the sales he had little handling before he got there although he had a headcollar on and at some stage had been gelded. I suspect that the headcollar was forced on him rather than him being properly halter trained and that has undermined his relationship with humans from thereon in. When he was sent for backing the holes in his education showed up and Bev knows that he is going to need some remedial work before he will be ready to be ridden. For this she needs to find a new home for him as she already has a stack of animals and children on her plate. 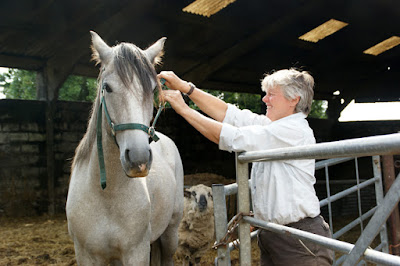 Today we just had a litte play with him to see how easy it might be to bring him around. The first thing I did was to take his headcollar off and then I wanted to see if he would let me put it on again. 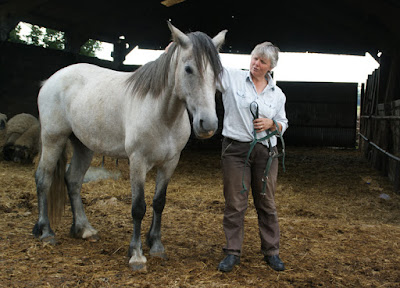 Although he was ambivalent about being touched he could be persuaded if the touch was right... 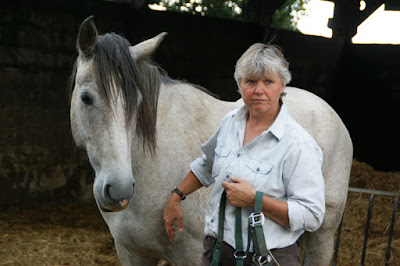 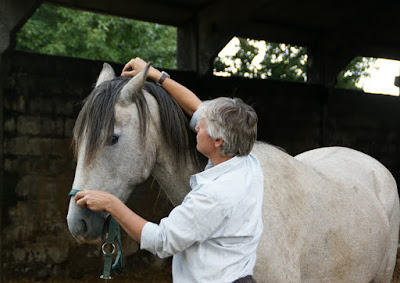 Very quietly I put the headcollar back on and took it off again a few more times. 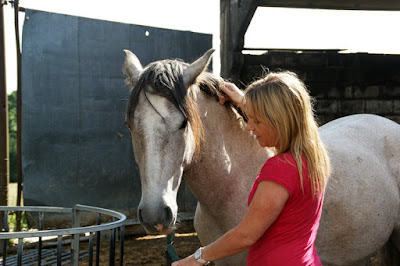 Julie then took over from me. 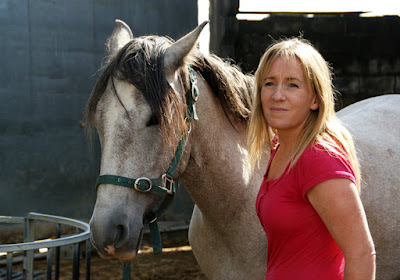 You'll see that faraway look in her eyes that is very useful for taking the pressure off a horse. 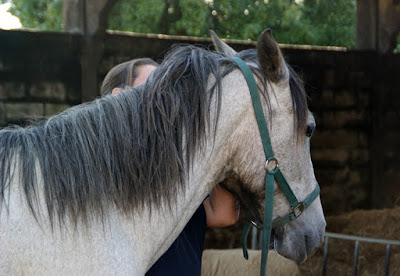 And finally, Tracey took over from her. This has all shown that Kes is willing to learn and to try and would therefore make a rewarding project for someone who has the time to take their time with him. In effect he is a two year old in a four year old suit. 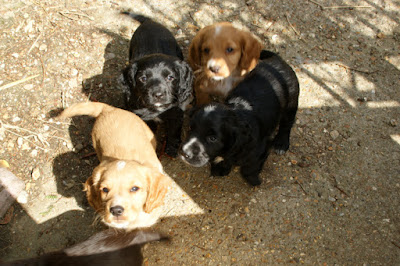 Hard as it was not to take Kes home with us, it was harder to resist one of these!
Posted by Loisaba Wildlife Conservancy at 9:20 PM