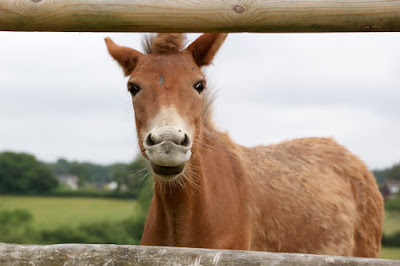 Henrietta came up to greet me again this morning. Her little neigh turns into a hee-haw after the first beat! I hope to start training her tomorrow afternoon. Today I learned that the two ponies that she arrived with were not the friends she had made since she was brought in off the Forest the week before but ponies that she has met just twenty minutes before on the pony bus service. She is quick to make friends.


Jackie has been steadily working Kesali since I last saw her, taking him for walks around the roads and Forest and doing a bit of groundwork and desensitisation. As a result we were soon onto long reining this morning. This is a super pony that has benefitted from having a bit of life experience, going out showing, as a youngster.


"Thank you so much for Saturday. I just cannot believe how well Kesi took to the long lining.  I worked with him again on Sunday. I went through every single exercise we did on the Saturday, including working on his ears. After unscrewing and screwing back up his ears and doing the soft pinching up the outside edge he then let me put fly cream in his ears for the first time without trying to jerk his head away. Then we attached the long lines and did the turning round exercise, before starting long lining proper. He was brilliant! We went round the little yard area, changed reins, did figures of eight, stopped and started absolutely beautifully. ps I am using the method of putting on the Dually you showed me. Much easier! And headcollars generally! So simple." JH 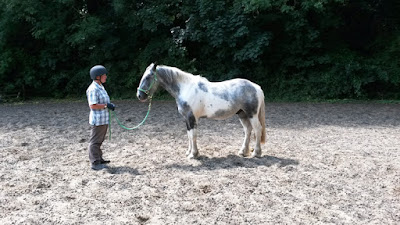 Looking at this picture you wouldn't believe how quick Woody a rescued cob is to go when he decides to. His past is a complete mystery and so his owner doesn't know whether she is just up against the pure instinct of a basically feral horse or whether that has been added to (multiplied) by past experiences of people. For seven weeks she was unable to catch him so it is some achievement that he now walks up to her in the field. Today we worked on setting up a few minor boundaries so that she can keep herself safe from hooves that have a tendency to come up off the floor when he is worried. We also worked on the very beginnings of foot handling. With any luck I will have some pictures of his bigger moments when they are sent through to me later - my camera is on the blink!
Posted by Loisaba Wildlife Conservancy at 7:00 PM