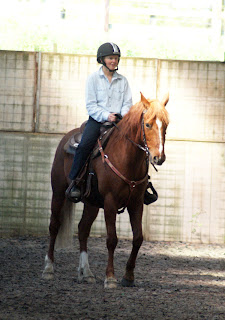 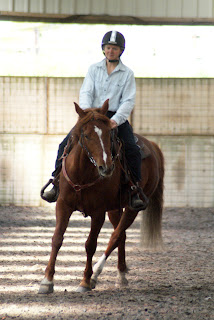 It seems that Theoden has a lot in common with our Toyota Hilux. Once he has been put into four wheel drive he may be extremely strong but he feels like he is dragging. The answer to getting out of four wheel drive in our car is to stick it into reverse until the light goes off. In Theoden's case putting him into reverse appears to have turned a light on. Instead of a horse that wouldn't go and wouldn't stop as I had yesterday, Theoden was soft, willing and responsive. We worked on walk to trot transitions and reducing the aids down to just thinking him up a gear. One two three four to one two one two. Easy!! 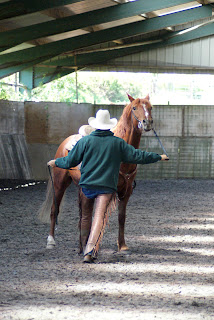 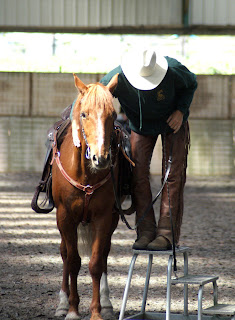 With fifteen minutes of our session left, I asked Mark to take a look at Theoden's mounting. He just takes one step away from the mounting block whenever I stand on it. With his back and tack checked and my having lost two stone (did I mention that?!) I can't think of any reason for him to do it other than not wanting to work or just plain old habit. It's the one thing that went in the wrong direction when he was at Jim's. I'm not someone who gets down from the mounting block and goes back to 'position A' as I believe that reinforces the behaviour with a release and teaches the horse to postpone even more. I've tried circling him around the mounting block on the basis that if he wants to work then he can go to work. Mark's theory was that Theoden either didn't know or had forgotten where he was supposed to stand and set about showing him exactly where he needed to be. Needless to say it worked and it's one I'll be adding to my repertoire. 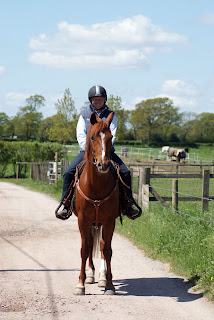 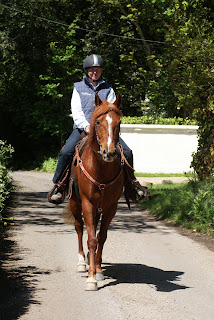 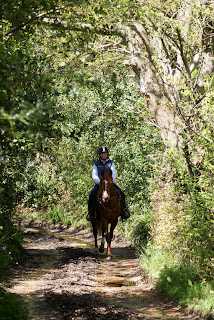 The smile on my face says it all and I had a lovely ride back to the stables where we have been staying throughout the clinic.
Posted by Loisaba Wildlife Conservancy at 8:45 PM