It's been a lively couple of days considering. Over the weekend one of the Commoners turned out another little coloured colt. A bit thin and probably wormy, he wasn't born on the Forest and has no reference point here at all. He turned up at my fence, already cut to pieces and, having been rejected by the passing herds of Sheltand and New Forest ponies who do seem to stick with their own, he eventually decided to scramble over two of my fences and to put himself in with Rye. Rye's not used to having company so it could have ended in disaster. Having been rejected by Rye, he was busily eyeing up the ponies in the field next door by the time I arrived yesterday.

A quick call to the Verderers, a word with the agister, and the colt's owner came to fetch him pretty quickly - well, straight in the middle of my working session with Rye. As the colt wouldn't follow a scoop of food or one of my mares, the owner set about chucking a noose around his neck and then wrestled with him, pulling him over backwards a number of times and half strangling him. He then forced a halter on to him and he was half dragged, half driven up the field and then bundled into a trailer. Not quite the No Fear, No Force that you might want but, being an amenable coloured pony, perhaps he won't hold it against people for too long. I didn't waste my breath trying to explain why it wasn't a good idea.

In the meantime I had also managed to find Thinny (Brandy) out on the Forest and persuade her to come in for a feed. Her owners have taken her home to avoid the stallion and she will meet up with her foal which was so abruptly taken from her last year.

The session with Rye, one restarted, went really well and he had a beautiful controlled canter up one of the tracks in the inclosure having been ridden around it on his own with me waiting a five-lane-ends to make sure that all was okay. He's got one more week to go before he goes home for a while and then comes back again after my holiday. Since he only came in for a week or two I am quite flattered that his owner has asked me to keep him on week after week so that she can continue in a way that she has come to love.

This morning I rode Theoden. He was an absolute joy and for the first time gave me 'dressage horse ears'. He's really listening and thinking these days.

Afterwards I decided to put the whole herd of seven ponies together. It was like watching two shoals of fish at first, or an episode of Meerkat Manor, as they weaved in and out of each other. When I left they were happily settled, having a nose blowing competition and eating lots of grass. 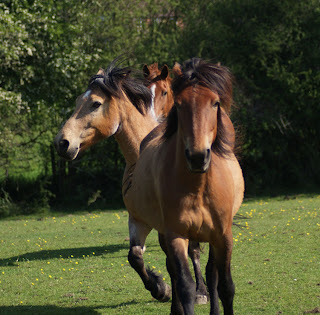 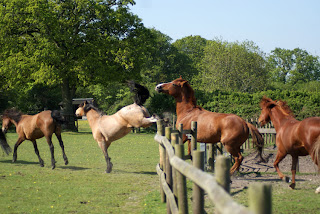 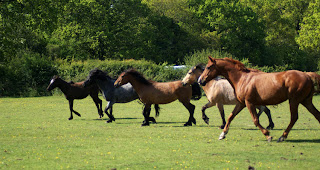 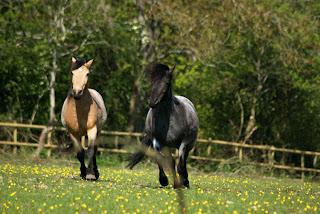 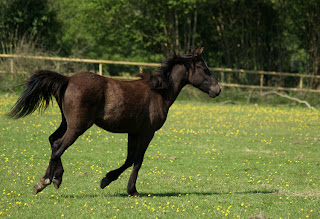 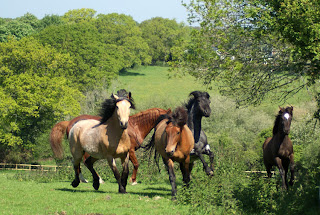 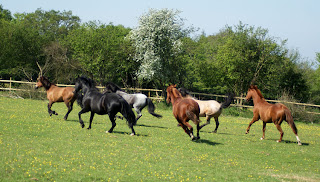