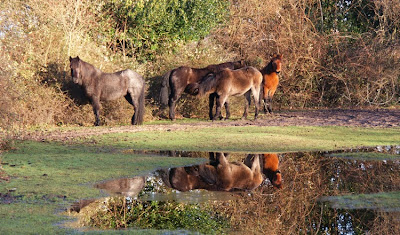 The New Forest sisters were waiting by the gate this morning and have now started to have some hay every day. The yearling, who must be a throwback to an Exmoor somewhere along the line, is still suckling from her mother but she is in good condition and I feed them both along with my own ponies. 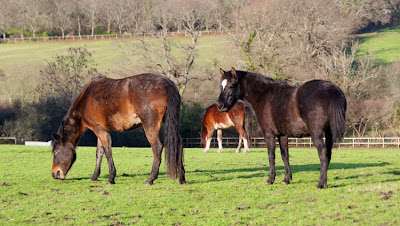 In the fields the three youngsters are doing well together, still preferring the grass to the hay. 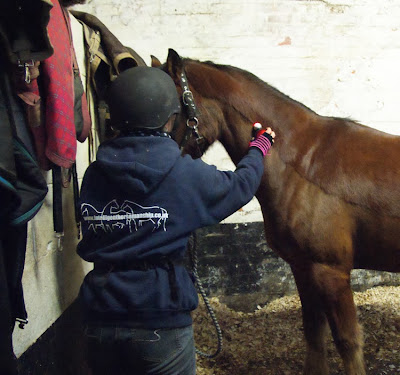 Today's main job was to work with a pony that was extremely frightened of the clippers. Whether because of a natural instinct, or because he has had a poor experience of being clipped previously,  his owner had to resort to having him sedated when he was clipped earlier in the winter. His first reaction is to back away into the furthest reaches of the stable and, if made to confront his fear to flick his head and to kick. Here he is accepting the hand massager, switched on, for the first time. The only reason I have a lead rein on him is to prevent him turning to kick me, otherwise there is no pressure in the line. To reach this stage I have used gentle advance and retreat with the massager off to begin with and then turned on, coupled with clickered treats.

He progressed to accepting a noisier electric toothbrush against his skin. He is still wary but relaxed once he realised that it was the same old same old. 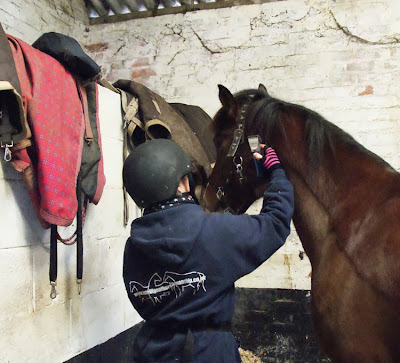 For the trimmers he was the same and he allowed them to trim his hair and to go right up his neck. I used a single click as an intermediate signal to "keep on doing what he was doing" which was to simply stand still and then I used a triple click to say "well done, you can have a treat for that." 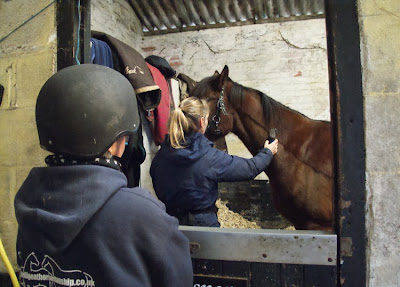 It's always wonderful to hand over to an owner who not only gets what you're trying to achieve but has great timing and a real sense of what she's looking for. She should be able to carry on without me after just one session although she may need me again when she starts to think about clipping his tummy area again. For the rest of this winter one more bib clip should do.
Posted by Loisaba Wildlife Conservancy at 4:02 PM