The rest of the weekend was spent at that Mecca of horse activity, Clyst St. Mary in the West Country. Fellow IHRAs Bronwen Packham, Jenny Major and Rosie Jones and myself were all booked to present two demonstrations at the Equine Fair. With massive help from the team at HorseWorld and Bronwen and Rosie's partners, everything we had arranged went entirely to plan. The barriers around the arena within the venue are so low that we needed to keep everything very low adrenalin and that suited us, and the horses extremely well; we didn't want Cuthbert to leave the ring via the nearest exit!! 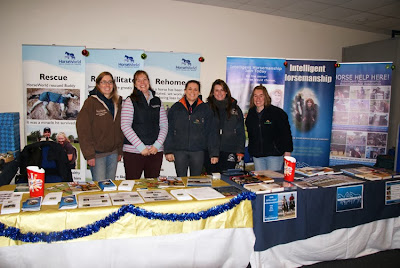 Saturday was a non-demo day so we were able to concentrate on the stand and take it in turns to watch other people's demos and mooch around the visiting horses.


Sunday, and it is our turn. Last minute planning and we're off... 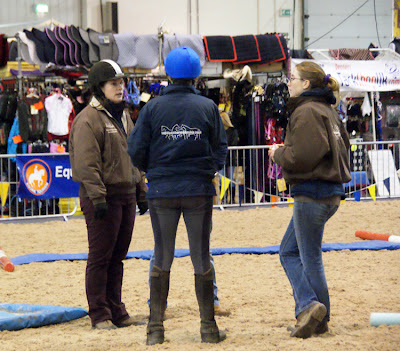 As the furthest IHRA away, I volunteered to do the commentary so that the others could demonstrate their skills to the customers on the doorsteps. Rosie Jones has just moved to the Bristol area and is already building up a substantial client base. I was ably assisted by my companion, Bingo, a pony that arrived at HorseWorld with his feet curled right over like Aladdin's slippers and maggots in them. His owner was successfully prosecuted. Remarkably he has now got brilliant feet and his is a regular teacher on the Discovery Course at HorseWorld. 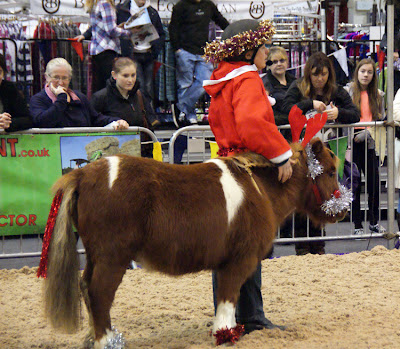 The theme of Rosie and Bronwen's demonstration was turning a maybe into a yes without passing no. Cuthbert has been backing away from things in his recent training and Rosie wanted to show how he could be asked to go forward without a battle. Starting off on the ground she and Bronwen worked on the line and with the long lines. 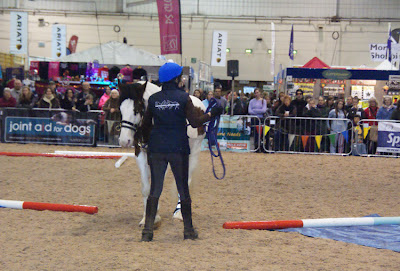 Cuthbert came into HorseWorld as a neglect case. At that stage he was a stallion and could not be gelded until the prosecution was over and he was securely signed over to the charity. Now six he has started his ridden work and should soon be going to a new loan home. He is a talented and athletic little horse and a joy to work with. 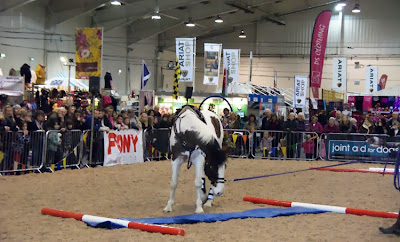 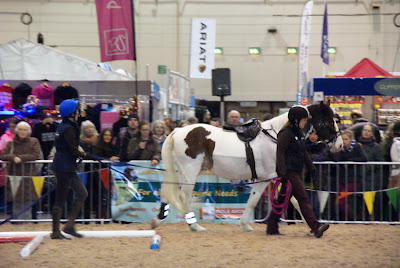 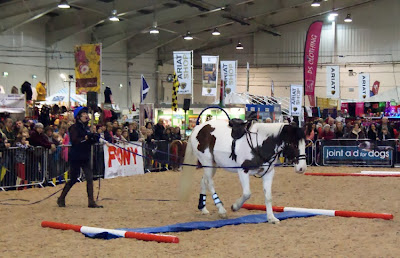 Jenny's session started with a laugh when inevitably Dart decided to roll on the lovely arena surface and thought he might just sit and watch. Dart was abandoned in a field a couple of years ago and came in to HorseWorld as a rescue, neglect case. He has recovered from liver damage and will eventually go on to ridden training and be re-homed on loan. He is a very nervous pony and yet calmly dealt with the busy arena environment and the frequent public traffic outside his stable. We kept Bingo in the ring throughout the sessions to give them both an anchor. 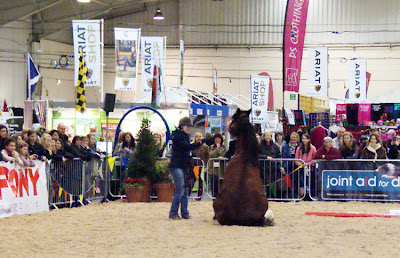 Jenny demonstrated a slow but sure progression through touching him with Vetwrap on a stick, to a variety of every bigger plastic bags and finally to a big flag. By using advance and retreat and allowing him to move forwards to bring his adrenalin down, she was able to persuade him to accept all of these things in turn without great fear or angst. The final aim, for the afternoon session was to be able to begin clipping him. 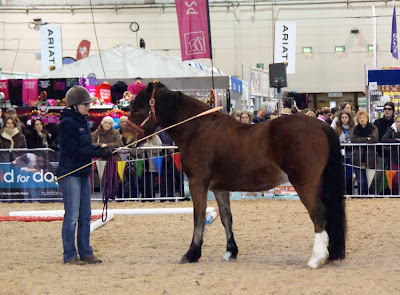 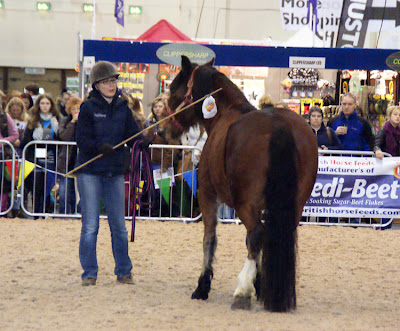 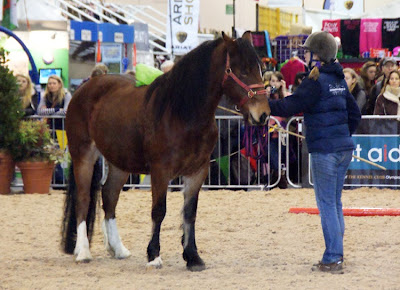 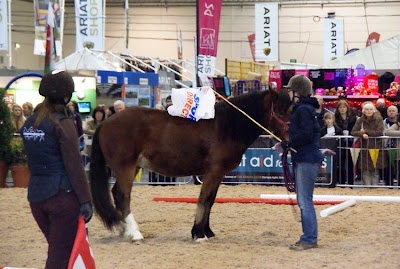 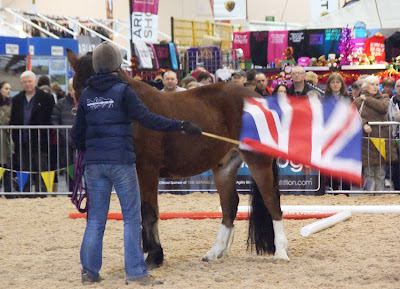 During the break between our demonstrations the time seemed to whizz by, as did Mary King, every popular and ever smiling.... 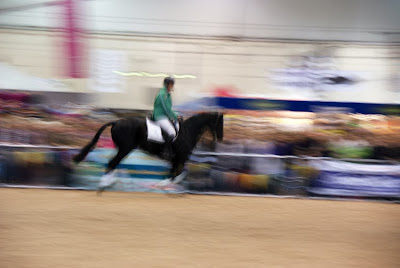 ...and of course, Bingo had to meet Beamish. 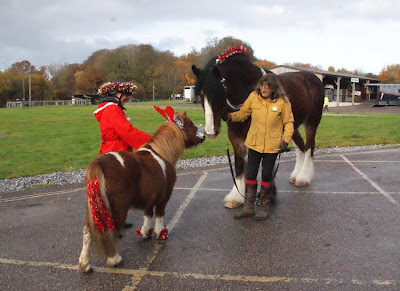 Rosie's training continued on board Cuthbert who clearly demonstrated his maybe turning into a yes. 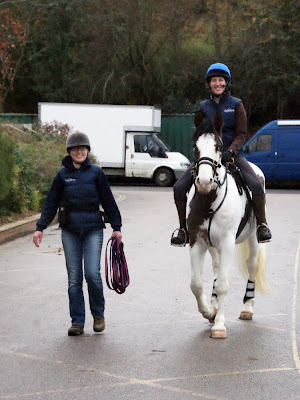 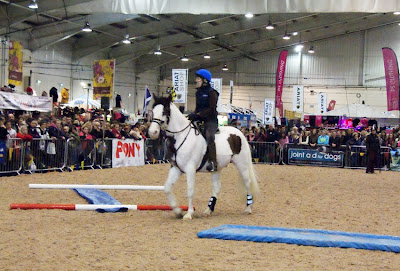 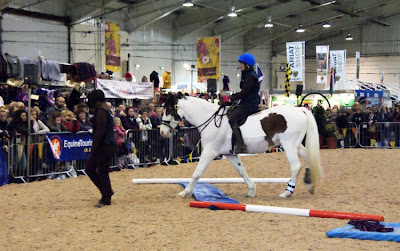 and as a finale, Jenny's pony, Dart, so called because he had to be darted in order to catch him when he was first rescued, allowed himself to be clipped without any drama. Success!

"VERY PROUD!!!  Huge well done to all of you! Kelly xxxxx" Kelly Marks


" Enjoyed  your demos at the SW Equine Fair, Sarah. Very interesting, and a good tip to get horses to follow what they're frightened of." VE

"I hope your display went well. The parts of it I saw were great, no-one jumped over the barrier when I was watching!"RD

"Many thanks for providing excellent demonstrations at our Westcountry Equine Fair this year. These were very well received and we have had some great comments. I hope we will be able to work with you again in the future.! Lisa Scattergood,  Contour Exhibitions and Events Ltd.

Posted by Loisaba Wildlife Conservancy at 9:40 AM