No, it really isn't what you think. Kelly is a Rothschild Giraffe living at Giraffe Manor in Karen, Nairobi as part of a breeding scheme which takes young female giraffes from the wild temporarily to breed one calf and then return to the wild. This project, aimed at boosting the diminishing population of Rothschild Giraffe, was set up by the African Fund for Endangered Wildlife  in 1979 by the late Jock Leslie- Melville, "a Kenyan citizen of British descent and his wife the late Betty Leslie Melville an American citizen. Jock’s extra ordinary vision of creating an educational institution in conjunction with rescuing the endangered Rothschild giraffes resulted in the present day Giraffe Centre that has become a World famous Nature Education Centre." 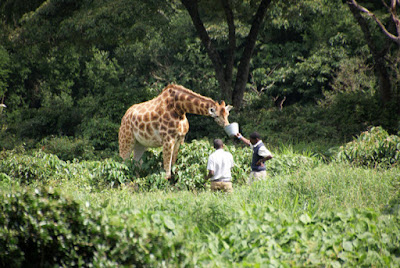 With an 8 hour gap between our flight from Loisaba (where the giraffes are Reticulated) and our flight home from Nairobi it meant that we had time to add in a trip to the Giraffe Centre where visitors can feed the giraffes from a high platform. The ten or so steps up to the platform made for interesting manouevring for Barbara and her wheelchair but Lilian the security guard helped to get us there. 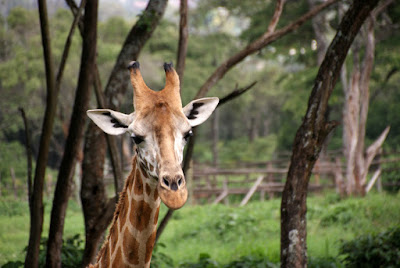 I have wanted to visit the Centre ever since I found a copy of Raising Daisy Rothschild in a second hand book shop and it was a fitting end to our stay especially as we could pick up some lovely presents for Tracey's children in Daisy's Zoovenir Shop. 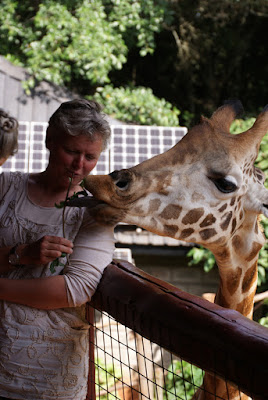 Details of the The Giraffe Centre can be found on their website.