Welsh Cob Darcy had his feet cold shod by the farrier today. Matt described him as "Perfect, good as gold". This comes in sharp contrast to the first time he tried to shoe him when apparently Darcy reared all around the yard and Matt couldn't leave his tool box anywhere near him.

"We have previously only been able to shoe Darcy under sedation, on the first occasion Matt had a go he needed a helper! Darcy would go back up onto two legs and jump about trying to lift a front foot at all times. He had a nasty habit of snatching his leg from Matt which was not only dangerous for Matt but dangerous for him too!  We then opted for Plan B which was to ask the vet to sedate him, even under sedation Darcy would fight it and you had to keep his head firmly pointed toward the corner of the stable (vet had recommended this was the safest option)." JB

It turned out that in his last home, a really experienced riding school, they gave up trying to shoe him due to the same behaviour. 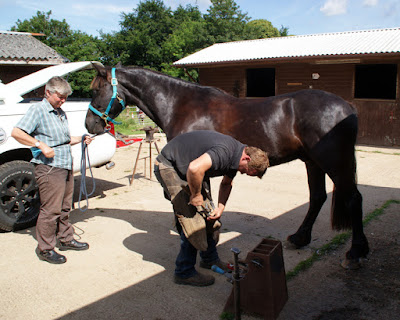 I went to see Darcy about few weeks ago to see whether there was anything we could do to help him accept the hammering in of the nails. After thirty minutes of clicker training he was accepting me and then his owner tapping away at his feet with a hammer in exchange for clickered rewards. 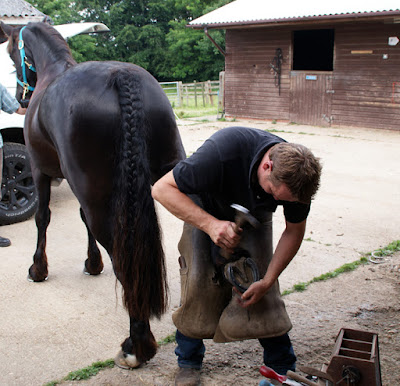 Normally I would have need a follow up visit but what with a holiday in the way and the seeming confidence of his owner, we thought we could risk making an appointment with the farrier for shortly after I got back. Matt confessed that he had bet himself £20 that we wouldn't be able to shoe Darcy today. Well, he owes himself £20 because all of the owner's practicing in the meantime has certainly paid off.

"Thank you so much, I'm so happy it worked out well. I'm having a celebratory glass of vino tonight)!" JB 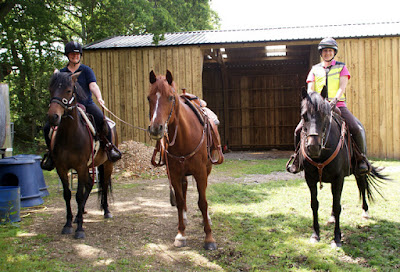 We took advantage of Laura again today to go out on our first hack with the three horses altogether. Bella, who will shortly be switching to a bit, was very pleased to be accompanied by 'Mummy' and 'Daddy' and Theoden was very pleased to have his two women with him. 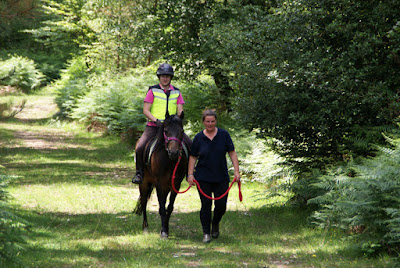 Later Laura rode out on Nettles who needs to be able to adapt to all genres of work and sometimes a mixture of them all. Adult on a lead reinis good for keeping his energy down even when we meet radio-active astronauts randomly spraying bits of the Forest. 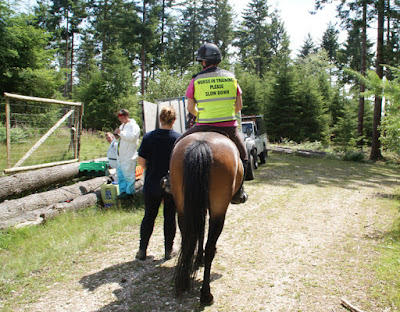 Janesmoor Pond was teeming with ponies and cattle today including my own. There must have been a couple of hundred making the most of the water and the breeze.

The mule filly was also about. I love seeing her thriving out on the Forest. 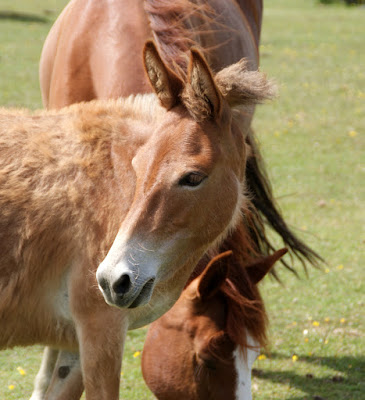