Even if it had been a normal working week, I doubt I would have got much done given the shaky weather. I have been working on a little horsey project that I can't talk about until her future is secure, but it has been a real pleasure. The horse concerned has turned out to be an absolute sweetheart and I can only do my best to ensure things work out for her. I've also been giving advice and acting as a sounding board for some established clients and some equine charities. I can see that it would be extremely easy to turn from being a paid horse trainer to an unpaid horse trainer! Accordingly I am going to have to think about some fees for advice. The book has made some slow progress.

The good news is that I have been offered a couple of jobs, both connected with the Animal Rescue Teams and I hope also to do some consultancy work. Please contact me if you would like help with your media and marketing work, especially if it involves horses.

Today I have had a 'proper job' working with Donut and his owner again. When we first met three sessions ago, control on the ground was a problem for both of them. Today we worked on 'boob power', using your chest and shoulders not only to influence your own horse, but also to assert control over others that may make your journey to and from your own field difficult. Using your voice is a waste of time generally, and so body language, the horse's own language, is much more effective. 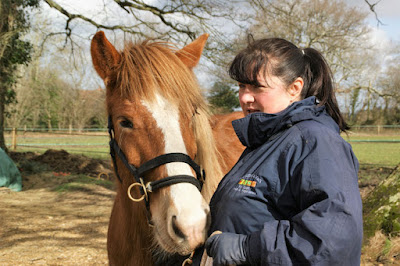 This set of photos reveals a pony that isn't naughty to be tied up, but one that is worried about being tied up, pawing and circling in order to keep going forwards, forwards, forwards, and expressing anxiety with a running foot in the last picture. I prefer not to use posts for tying up which give 360 degree movement. 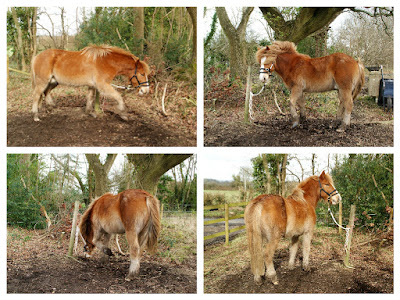 We also went out for our first walk on the roads which proved to be no mean feat when even the first few yards was full of challenges including barking dogs right at the fence, wheelie bins, horses galloping in the field beside the road, and quite a few cars and bikes. This is Donut's first outing from this new field, and involves leaving his friend's behind.  Here comes a load of mixed metaphors but this is what I wrote to his owner:

"To Donut this may have felt like Mission Impossible and remember that, after a gap of a good few months and a move to a new home, he will be a fully paid up member of the Flat Earth Society and this is why the (slow) Bean Bag Race is useful because it builds up a new map for him." 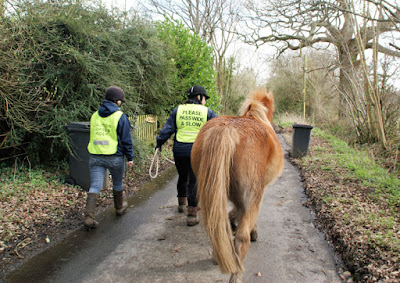 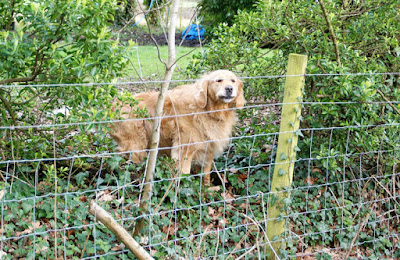 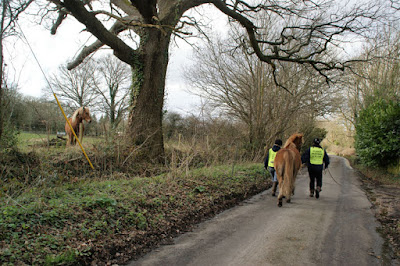 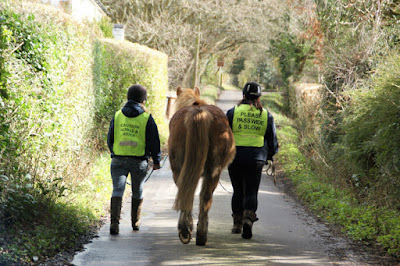 By this I meant that we took him up the road to one spot, turned around and came back to his own gate, then took him up the road to another spot, and then took him back to his gate and a bit beyond, and so on...This had the advantage of lowering his adrenalin levels and also Wendy's which she said went from being 12 out of 10 (!) right down to a 4 out of 10 by the end. Donut was also far more relaxed and appeared to be enjoying himself, turning from Julie to Wendy as if listening to their conversation (which of course he was). 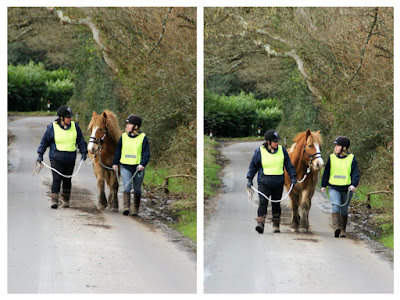