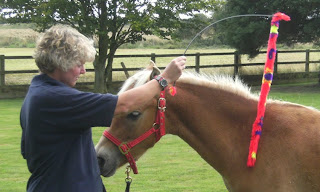 On Wednesday I went off to see Rafargo, the Andulusian horse, to work on his loading again. His owner hasn't had much chance to practice since the last time I saw her, nevertheless, Raf was happy to load and to stand in the trailer. Instinctively I felt that it was really important for him to be confident enough to back off the trailer rather than take him out through the front ramp. I felt that he would surge forward and out rather than taking one step at a time. Evey time I put even the slightest pressure on the Dually, his into-pressure response would be activated so that he would go forwards rather than backwards. I decided to try clicker training him so that he was rewarded every time he moved a back leg backwards and then by using the click as an intermediate bridge for the behaviour I wanted, I was able to ask him to be more definite and more confident about moving backwards. He picked this up extremely well and was soon stepping backwards step by step, very quietly. As a result we were able to ask him to stand anywhere we liked within the box and I am sure that he will now unload forwards just as steadily and accept the partitions within a couple of sessions.

I got this from his owner this morning: Thank you so much for coming over. We all think you are terrific! We love seeing you. Mum and Dad were so impressed with your work, yet again, and it really helped to be able to talk through the plan for Rafargo. I have done more clicker training with Raf, and it's SUCH fun! Perhaps we have found the motivator we needed. He was at my shoulder at different paces, backing up beautifully and following instructions so carefully.

After that, it was off to Galloper Horseboxes to talk to the manufacturer and Steve Mills, our local horse transporter, to see what could be done to create the ultimate horsebox. Galloper are working with light but very tough materials that they import from Germany which mean that their two horse horseboxes can carry a much higher load. I liked the fact that they will try to create exactly what the owner wants and in Steve's case, that is a really safe horsebox. It was great to be asked to help.

Yesterday I went up to Princes Risborough to work with Wellow Leaf (Welley) and his small friend Elmo. Welley is a pony that I halter trained last year and it was great to see just how confident he is in his new home and quite quite beautiful of course.
Posted by Loisaba Wildlife Conservancy at 12:35 PM