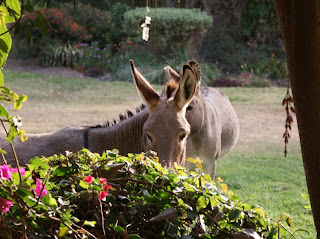 Donkey (foreground) and Dorian. You can clearly see Dorian's half cut and notched ears here.

I have received this e-mail from Debbie since my return. It's so good to hear such positive news on what was a really terrified donkey.

"Dorian's doing brilliantly, he stands by the door now in the mornings and when I go in he doesn't move and he just loves being brushed every morning and is also letting me clean out his feet! I have also managed to get near him and stroke him out in the garden a few times, he is really coming along. I went to the KSPCA this morning as they have a female donkey that doesn't want to be near people - not surprisingly as she has been 'hobbled' by her back leg - I did the glove on a stick bit until she was calm and relaxed, I even managed to put a hand on her three times, but thats all. I have shown the guy there how to do it, but I don't know how he'll be. I'll have to keep trying with her and try find her a nice home somewhere with someone who will try with her. She is so pretty too, really dark with almost black legs.

It was so great having you here, I have learned so much from you, you've been brilliant. And David is the best 2 legged horse I've ever seen, 10 out of 10 for him too! Keep in touch, lots love Debbie"
Posted by Loisaba Wildlife Conservancy at 12:57 PM