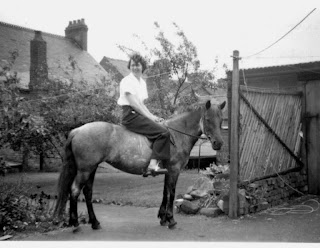 It's been a funny old week if you start it with Sunday. David and I went up to see my Mum and then to see my Nan who is in a nursing home. Nearly 91, she was a phenominally intelligent woman but now she has Alzheimer's. She struggles to remember what happened a minute ago and is finally losing her long term memory. Things that used to trigger all sorts of stories have gone. I took our photograph album from when we went to Canada 20 years ago but she had fallen asleep by photo three so I just held her hand instead - in fact I held both of them and just tried to re-charge her batteries. I'm not a good grandaughter though, I haven't been to see her for ages. The fact that its a seven hour round trip is no excuse.

Monday was a day off and a trip to the dentist's in the morning. Don't you feel vulnerable just before you go in and as you lie back in the chair? The fact that the dentist and I went to the same University makes no difference whatsoever! In the afternoon I was just about to set off to see my horses when I got called by Jenny G who lives in Woodgreen. Her pony Rosie had bad colic and needed transport to Liphook. It would have taken an hour to organise my trailer but I raced down there to help load the pony or do anything else that was needed. By the time I got there five minutes later there were at 6 people plus the vet and his assistant all on hand to help and a horsebox on it's way. Horsey people are funny folk sometimes but it was amazing to see how everyone rallied round. Very sadly Rosie didn't make it but it wasn't for want of everyone trying.
Posted by Loisaba Wildlife Conservancy at 6:31 AM