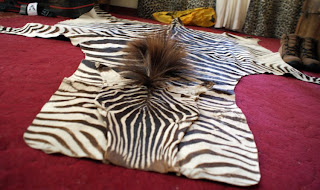 I must say I was a little taken aback to find a dead zebra on my bedroom floor at Caroline's complete with mane and tail - I felt like I had to apologise to him whenever I accidentally trod on him. There were two more at Andre's. We were also greeted there by a little black snake and, having been told that baby mambas are fully poisonous the moment they hatch, I wasn't going to hang around with my Observer's Book of Snakes - it turned out to be an Palm Olive Housesnake, complete with freshly swallowed mouse. Andre popped him into the laundry basket where he had his photo taken before being turned out in the garden. I'm normally fine with snakes but I became very jumpy after that and nearly had a heart attack when a ghecko popped out from behind the clock.
Posted by Loisaba Wildlife Conservancy at 1:15 PM