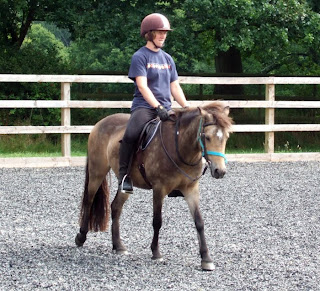 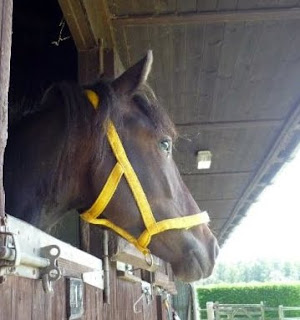 Christopher Robin (top) has had half a gap year during which time he has had his back treated by Kate Boe and a new saddle fitted by Nathaniel Underwood. His owner, Lorraine has been taking him out for walks, practising her groundwork and long reining him to get him fit. He is certainly moving a lot better at both ends. Yesterday she got him for the first time with me on hand in case there were any problems. He was perfect and it was great to see him relax into the bit and realise that nothing was going to hurt. All credit to Lorraine for putting in so much time and let's face it, money, so soon after buying this pony.
Later it was off to see Hannah's latest acquisition, Lucky Lane Clover, who is very similar to her other pony Georgie. This 15 month old filly is pretty friendly already and just needs some some work on gently putting the headcollar on and taking it off and then on to leading. As Georgie carried off the best novice and best Forest-bred pony at the New Forest Show, Clover is bound to find herself in the ring pretty soon.
Fish and chip supper for six last night as I tested out my African photos on a kind audience. 10/10 for stamina.

Posted by Loisaba Wildlife Conservancy at 6:53 AM