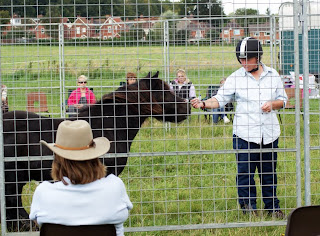 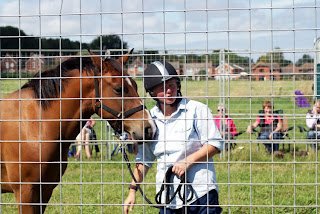 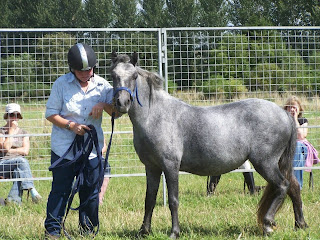 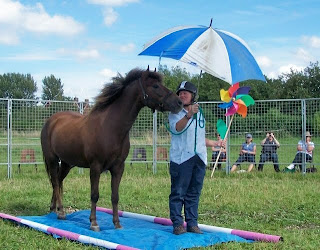 My second demo at Britford this week went very smoothly. I worked with five different horses and ponies in five hours and it was as if each of them had read a book on the subject. Little Bailey (top) showed how acknowledging the first offer to be caught can greatly increase your chances of catching a pony. Bailey was left tethered at the side of the road a few years ago and crowds of children used to vault onto his back and torment him. He has got over all of that and is much less wary of people than he used to be. He also enabled me to show clicker training for catching and amused everyone by walking up and asking me to put his headcollar on. I first met Gracie (third one down) about a year ago. This pony was found orphaned under a bush and was then fed sheep milk. When Josie got her, she was pretty malnourished but she had benefited from other pony company. Today I introduced her to long reining. The two Foresters, Forrester and Diplomat (second and fourth pictures) demonstrated groundwork and desensitisation techniques. These are both really nice ponies and great examples of the New Forest breed.
I have to confess to a sleepless night last night following the discovery that my "Madonna" headset had packed up. Fortunately David took over the commentary and I was able to have quite a restful day - for once I am not sick of the sound of my own voice!
Thank you so much for an excellent and informative demo. My two friends have both already tried out various things you suggested/demonstrated and have been amazed at the results! LB
Just a quickie to say that once again it worked! – A new pony arrived on our yard and everyone was patting – yes patting – him hanging on him etc! – poor 18 yr old boy Welsh/TB/Arab nice looking but a bit – where’s my mum gone? So I asked the girls to watch & showed them how you did it! – Walked up with hand palm down towards him, not making eye contact etc, he walked up sniffed my hand, I turned away he followed! Wouldn’t leave me alone then !! His new mum tried it & now he is more settled and seems happier with her, still nickers at me though!! LB
Posted by Loisaba Wildlife Conservancy at 6:48 PM