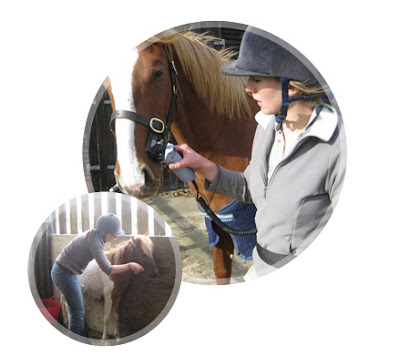 I am absolutely delighted that my great friend Jenny Major has formally been accepted as a Recommended Associate of Intelligent Horsemanship especially as I 'discovered' her. Jenny and I first met at the Moorland Mousie Trust where she had only just started as an instructor and trek leader. On that day she had been given a list of ponies and a list of people and was required to put the two of them all together before venturing out onto the foggy moors to take a ride out. Given that the (Exmoor) ponies, save for their brands, were indistinguishable,  and the riders were of various abilities, she remained calm and friendly as she sorted out who was who. Off she went with her entourage to find her away around unfamiliar territory as the fog thickened and the signal on her telephone failed. An hour and a half late returning, she was still serenity personified even though one young rider had started to cry almost as soon as they were out and had not stopped since. Difficult to tell an new employer that you don't think it's a good idea to go out and she coped admirably. For the following fortnight she immersed herself in training the un-handled colts with me and the students and became an invaluable member of our training team. I told her then I thought she would make a fantastic RA. She clearly loved the IH way of working and thinking and although she continued to work for the MMT for some while after that, being an RA became her next goal. She has worked with me at the Dartmoor Pony Training Centre and is an excellent tutor. More recently we have set up the Hands on horsemanship Courses at HorseWorld along with Somerset based Bronwen Packham.

Jenny is based near Taunton and will cover a wide area centred there.

More recently I have been in contact with another young woman who would make a marvellous RA, this time to cover Dorset where there is a massive hole in IH coverage. I often go to Dorset but the fuel charges can be prohibitive. Kate has started her courses and is already involved with training horses and at 24 she's really got her head screwed on.
Posted by Loisaba Wildlife Conservancy at 8:28 AM