There will be a certain irony, or sadness, if it isn't massive high sided lorries, enormous tractors or Jeremy Clarkson style drivers that stop horses being able to be ridden on the roads but cyclists instead. An irony too at a time when EQUAL RIGHTS are at last being established for various sections of the community, long held back by inequality, if horse riders are not seen as having an equal right to use the roads safely. We have the same interests at cyclists, an interest in being outside, being eco-friendly, and engaging in sport.

It's not the lone cyclist that is the problem, it's the peleton minded, travelling in big fast groups, dreaming of the Tour de France and thinking that they have a greater right to be there than anyone else.

In Mallorca, where Xanthe lives, the cyclists, many of who are training for big events all over Europe, have taken over the mountain roads throughout the year making it a nightmare for other road users.

I'm a cyclist myself but I recognise when  I see a horse that they might be worried about the bike. So I slow down and talk to them. Most horses can cope with a bike or two, even approaching from behind, but it takes the most saintly horse to cope with a swarm of bicycles coming towards them or from behind.

For some cyclists I imagine it is a lack of understanding about the psychology of the horse that leads them to fly past, for others a solid belief that they have a greater right to be there or that horses should not be on the roads if they can't cope with groups of cyclists.

There is an honest but mistaken belief that horses don't need to be on the roads because there are so many bridlepaths but many of these can only be accessed by going along the roads. In any event, horse riders still cannot get away from cyclists on bridleways. Kate, who I saw on Tuesday, has been campaigning for years to separate cyclists from horse riders on the South Downs Way. There one of the ramps provided for the cyclists fun had it's take off on one side of the bridleway and its landing on the other! 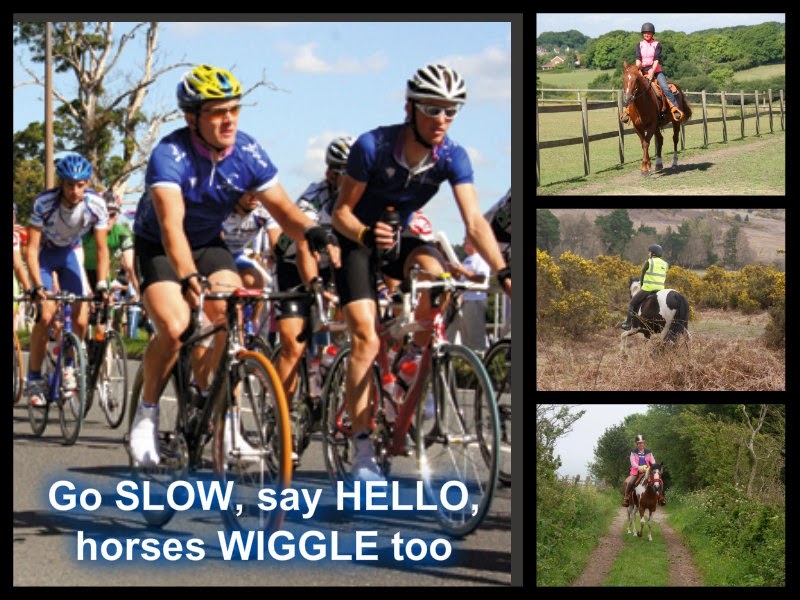 I would welcome the opportunity to work with cycling groups to increase their understanding of the way that horses think but also to involve them in training horses to relax about being over taken by a group of cyclists. We have so much in common in terms of road safety and sport that it's a shame if we can't get it together.


Posted by Loisaba Wildlife Conservancy at 11:58 AM