Having spent most of yesterday looking down, I spent this afternoon looking up...a very long way. Irish cob, Prince, is at least 17 hands high but he's yet another 11.2 horse in a 17 hand suit. He was bought six weeks ago from a dealer having come from Ireland. In the time his new owners have had him he has put on weight but not really fulfilled their expectations of him. Having ridden nicely at his trial, he has become very spooky, finding it hard to even stand still in the stable yard.

We worked on this in the field to begin with, asking him to stand still and this went really well. His owner is already pretty skilled at IH type techniques so it was a matter of encouraging her to finish her training on a full-stop rather than a comma, i.e., if he walked into her space by one stride, she should back him up two strides. 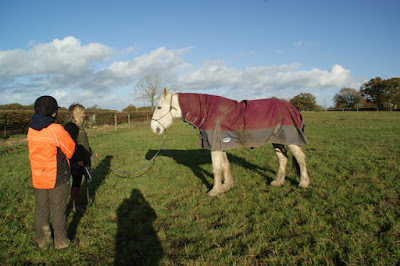 Up in the stable yard he showed how frightened he is. The building emits a low hum in the wind (and Abigail was helping to accentuate this) and he has never been into the barn itself. Up until now his energy has been contained by allowing and encouraging him to circle and sometimes, that is all that people can do. However, this can lead to the horse pushing through people or moving them with their inside shoulder. 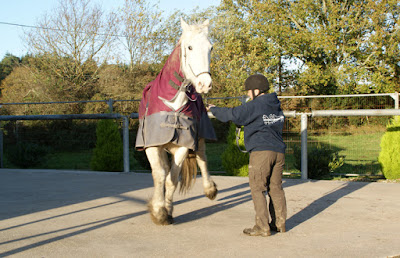 Instead, I asked Prince for some very short periods of standing still, turning his head towards the building so that it wouldn't be in his 'rear view mirror', and made use of the one sunny spot on the yard. 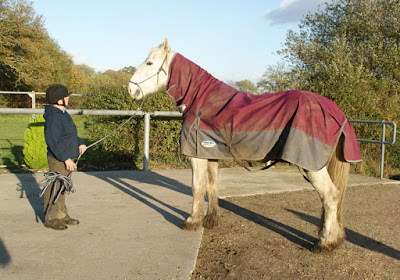 After just a short while each time, and before his energy overwhelmed him, I took him for a little tour of the yard and then into the stable area itself, so that he could walk off his energy and explore the building so that it was no longer a mystery. 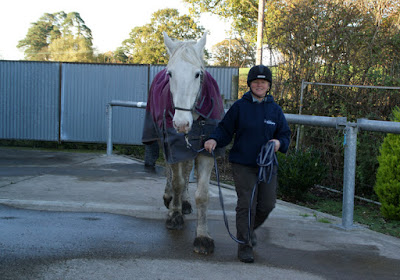 Towards the end of the session he was standing still much more easily. In time hopefully he will relax a lot more but until then he should not be tied up in the yard as this will simply make him feel more vulnerable. 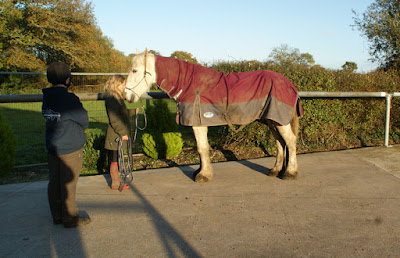 "...thank you so much, I feel like we have a plan now. Didn't imagine we would get him standing still in the yard today so thats a real breakthrough." LB 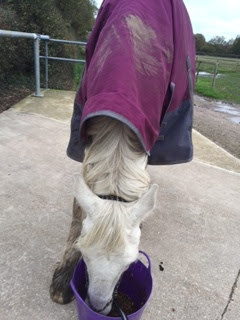 "Prince had his dinner in yard last night, a first, thank you so much :-)". LB