Having been rained off yesterday, great kudos to today's horse owner who decided to brave the gale force winds and use that as an opportunity to work with her horse when his adrenalin was likely to be at its highest. Kudos and his field mate both come from World Horse Welfare but since arriving, Kudos appears to have been promoted beyond his ability, and is struggling with the leadership role which sometimes accentuates his instinctive reaction to things.. It's natural for horses to be worried about things they can't hear or see properly so conditions like today are a real test

I worked on proving to Kudos that at least when a human is a round he can go off duty and relax. This entailed a little more clarity when leading him, asking him to be right by my side rather than pushing me along from behind or pulling me along from in front. It also involved asking him to stand still and not to keep pushing forward just for a few seconds and later a few minutes at a time. This was then rewarded, and his energy disippated, by going for a short walk. 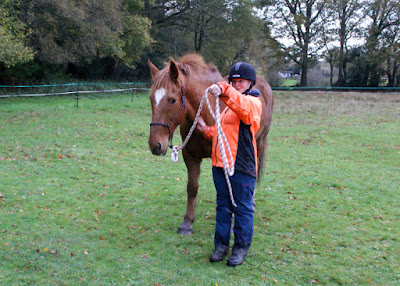 Soon I was able to hand him over so that his owner could practice the same things - here she is setting off as if she is going to the chocolate shop. 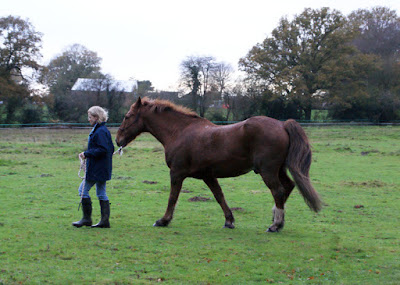 None of these pictures shows just how tense he can get and just how tall when he is worried.

"Thank you for your notes and your session today, definitely masses to think over..."HB