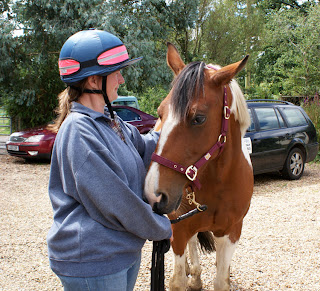 Irish Sports Horse Fern has changed home five times in the last couple of years having been imported from Ireland and gone through a couple of dealers and a riding school. Having heard all of that I anticipated that there might be some interesting issues that might need to be resolved. In fact she is a very straightforward, bright and sensitive little mare and a nice blank canvas for her owner. They have already formed a trusting relationship which were able to consolidate with some basic groundwork today. Fern is surrounded by a multitude of other animals including pigs, alpacas and chickens and now has a horse companion too. She was a little ear shy but a brief session of 'touch and move away' technique with the feather duster and then our hands resolved that almost straight away. The good news is that Fern did not react to the movement of the handle on the feather duster, usually a good indication that a horse has not been beaten.
Posted by Loisaba Wildlife Conservancy at 7:08 PM