Busy bank holiday with four ponies to work with. I started off at 7.30 a.m. with Rose. Her timetable today included a little loading practice, further desensitisation with the fly screen and a confidence walk out on the Forest on her own (well, with me you understand?). She did really well, loading herself at one stage and having the back gates closed to the trailer. She stood quietly under the fly screen and then behaved very calmly out on the Forest. 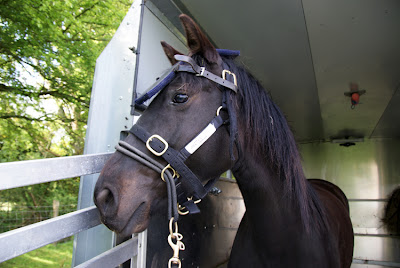 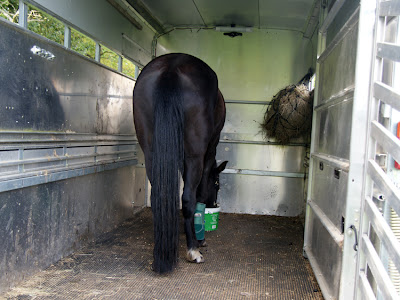 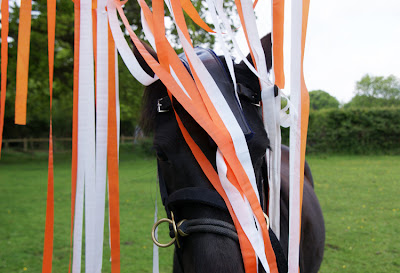 Off to Brockenhurst after that to work with Rose on trying up and leading out. This pony was Indiana's companion for a while and Sally ended up buying her. I call her a Clydesdale Pony because of her splashy markings. 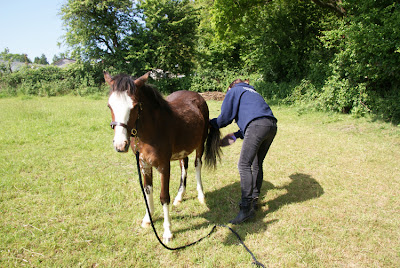 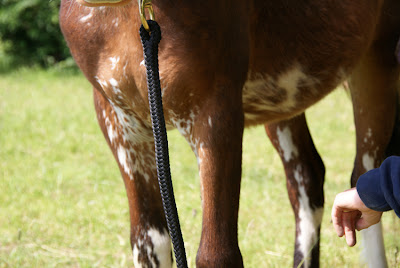 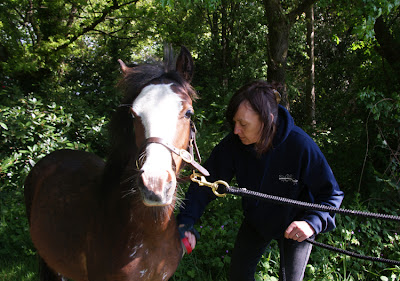 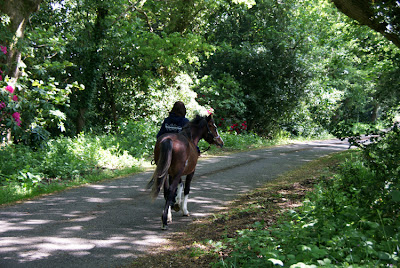 Rosie is happy to be ground tied when groomed in the field. You'll note that as soon as she is actually 'tied up' Sally is holding the end of the rope so that if Rosie backs up she can gently ask her to move forward again and then put a release back into the rope.

Even though Rosie (a yearling) went only 100 metres down the drive she found it a bit worrying and the others in the field were all worried too. By taking very short walks like this we can build up the pony's confidence and that of her field mates and then gradually extend the distance and the time for which she is out. In that way everyone remains safe.

When Rosie went back into the field all of the ponies had to practice their emergency drill all over again to make sure that everyone knew what they should be doing! 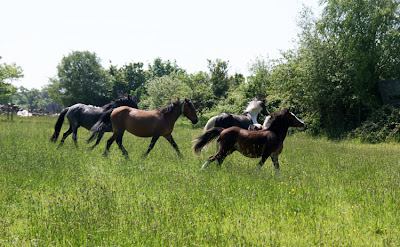 and then it was time for a drink... 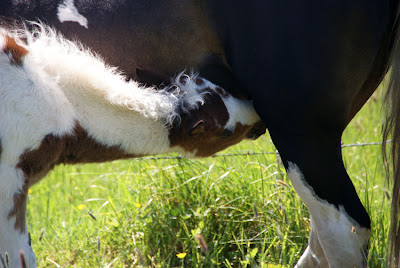 Back to Fritham then to do some work with Coco this time. More loading work and another walk arund the Forest. 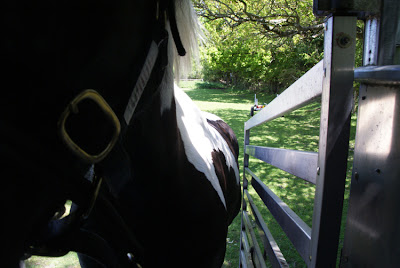 I finished later at Hale where I was working with Minty again. He decided that he wasn't going to go in the stable today so we did wonder whether we would do any good at all. Instead I started to work with the feather duster and clickered treats out in middle of the field. Minty grew more and more confident and by the end of the session |I was able to put the scarf around his face in a figure of eight just as if it was a head-collar. He seems to love the scarf once it is in place. More practice later in the week.
Posted by Loisaba Wildlife Conservancy at 7:40 PM