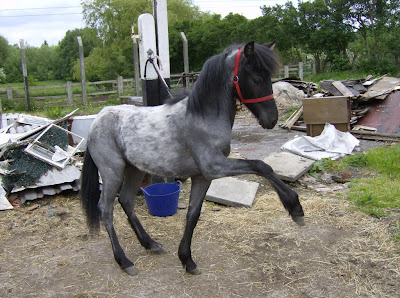 Not my pony I hasten to say or one that I have tied up.

A lot of horses feel more vulnerable when they are tied up. It makes sense since it is impossible for them to flee. Instinctively they know it's not a good idea. We reinforce this whenever we tie them up to administer some uncomfortable procedure which may be something as innocuous to us a grooming them a bit efficiently or putting on a saddle that we don't realise doesn't fit. When the horse has a reason to be anxious, which may be just caused by the tying up itself, he will develop strategies to postpone whatever may be about to happen to him or to influence the situation in some way. He will have at least 180 degrees in which to do this and  he may simply fidget or move about, or start to barge into you with his bottom or even squash you against a handy wall. This pony is pawing because he feels the need to move.

Our job is to make sure that we make things as comfortable as we can, read what he is trying to say, and be calm around the horse, and only then deal with the unwanted behaviour. The first thing to do is actually to untie the horse so that he can be schooled when he offers unwanted behaviours. This sounds counter-intuitive but it stops him using his 180 degrees or more of influence. We can work on standing still, moving away from pressure, not biting or striking. It is instinctive, automatic, non-thinking behaviour for a horse to move into pressure when touched on his sides and he has to be taught to do the opposite (and to think!). Once this has been done he can be tied up again but with the rope actually through the ring and to the handler's hand (so not really tied up) so that the handler still has some ability to school. After that he can be tied up again if he is ready.


Posted by Loisaba Wildlife Conservancy at 8:19 AM