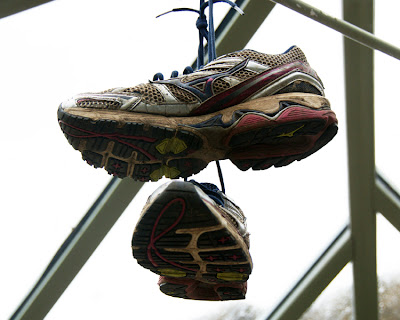 These days a lot of horses are managing perfectly well without shoes.

When I started running I was advised to get the best running shoes that I could afford and to go to a shop with a real expertise in running shoes. The staff watched my running gait, measured my feet and allowed me to go out running around the town in the shoes that they recommended before I paid for them. The shoes were perfect. As a result, I ran my first 500 miles or more with no injuries and got fitter and happier. When the time came to replace them I went back to the same shop but by this time they had changed hands. They were now part of a small chain, not really interested in personal service and they no longer sold the same make of shoes. Nevertheless, after trying on a few pairs for a few seconds and going for a short run to the car park and back, I was persuaded to take on a new pair. I broke them in carefully (is it possible to 'start' trainers?) and gradually increased my distances but discovered that after four miles not only did they cause blisters but they caused me to compensate too. I took to alternating them with my old running shoes but the blister took an age to go and I was never really comfortable running longer distances. I became less confident and finally succumbed to a sore Achilles which meats that I wasn't able to run at all. I know that I need to go and get another pair of running shoes, and I will go to another shop that has been recommended, but at the moment I can't even test drive a pair.

So many problems for horses start with an ill fitting saddle or one that becomes ill fitting as they change shape. Sore backs lead to compensations elsewhere in the body, behavioural changes and long term damage. I find it really hard to recommend any saddler when I hear them praised to the hilt one by client, to find that the next client has been really dissatisfied with their saddle from the same person. I recently went to a client who had been sold a saddle without anyone seeing a rider on board and as soon as Charly got on, it was painfully obvious that the saddle did not fit at all. Saddles are expensive and yet we get very little opportunity to test before we buy because of the risk that they will be damaged. If only there were a saddle library!

As owners we have to become really well educated on saddle fit and to keep checking it ourselves and to notice when it is becoming too tight, unbalanced or lumpy. The problem for saddle fitters is that they are fitting for what they see on the day and that may change - in some cases we want it to change if we are seeking to allow wasted muscles to recover or a young horse is starting to muscle up for the first time.
Posted by Loisaba Wildlife Conservancy at 8:44 AM