My tallest and smallest horses on the same day again. Strangely both of them have been fundamentalists when it comes to the vet. Mollie had a lot of veterinary intervention in her early life and must have felt pretty vulnerable. As a result she has been prepared to defend herself by rearing up and running through people. Last week we practiced clicker training for foot handling and also 'mock' injections but with only a little time for homework in between Jane and I wondered how she would respond to the real thing this week. 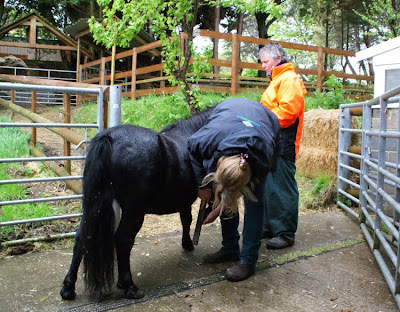 Dr Katie Vincett from Vectis Vets on the Island has been Mollie's vet from the outset and has always trimmed her feet. This has often been a battle and so it was good to hear that she thought this morning's trim has been much quicker than usual. 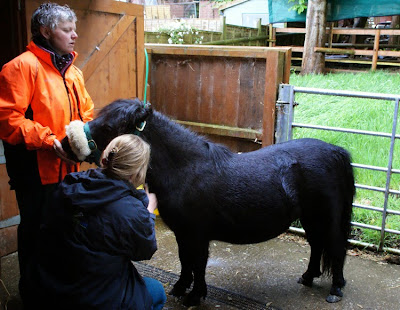 Normally Mollie has accepted the clippers but has recently made the connection between them and injections. On hearing the clippers she reared and made ready to leave. Once she was calm again I clicked her before the clippers approached and not only did she stand completely still to be clipped but she didn't appear to notice the syringe which was used to take blood for a blood test. The key seems to be to notify the pony that clickered rewards are available by making a single click usually used as a marker for the desired behaviour. It certainly takes the attention and distracts from other thoughts. 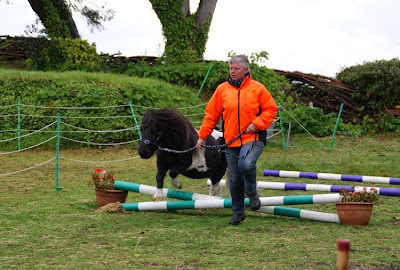 With the weather drying out in the afternoon it was time for some serious fun. Pie used to be very worried about jumping, always bucking on landing as if to defend himself against the pole behind him. Perhaps he has hit a pole in the past. Regular practice over lying poles and a matter-of-fact attitude has made him much more confident. 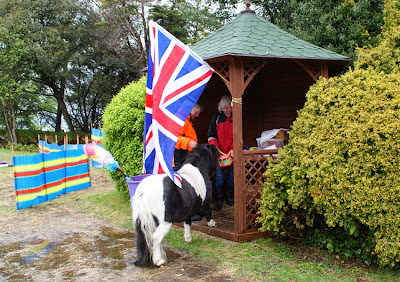 Today we also wanted to concentrate on desensitisation to noise with a little band of 'protesters' hidden in the summer house. Pie was keen to investigate. 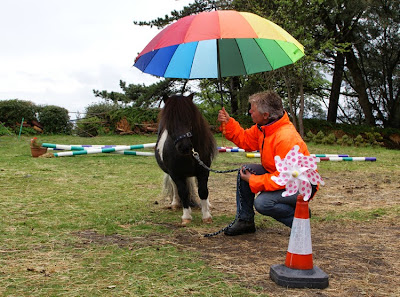 Mairi's turn next and she was asked to negotiate the tyres... 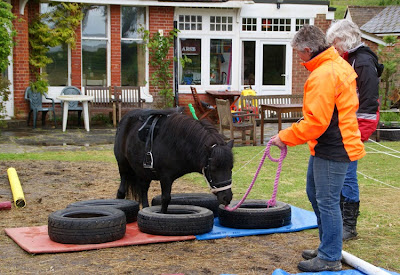 and was ridden by Monty RoBEARs again. She proved to be much happier with us on her left holding the bear than on the right so we swapped sides and later ended up with one of us on each side. In this way we can help her to get accustomed to things appearing in both eyes at once. 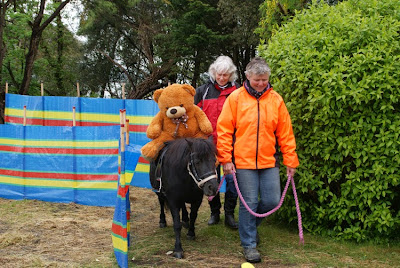 Lastly it was time to get Mollie out again. Having no other baggage she accepts things so easily... 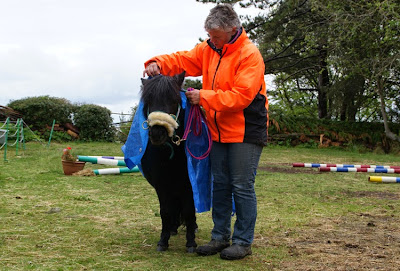 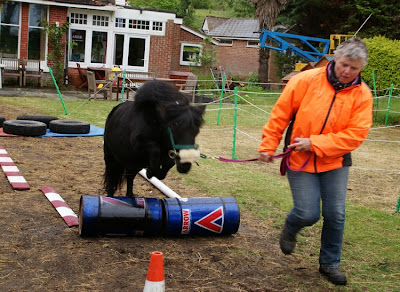 Final stop of the day was Riley. The look in his eye was completely different from the outset today and he let me touch him with my hand all along his body right from the start. His greatest bugbear is the stethoscope and so, armed with the remnants of an old one, I started to touch him in his tender tummy region. The key here is to change the sensation immediately after taking it away, giving him a lovely deep rub. 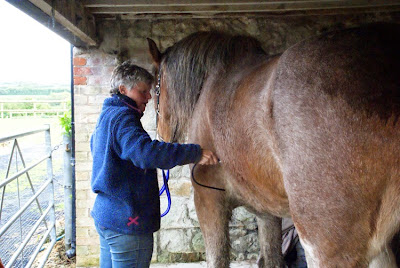 He seemed keen to explore the other fur and fabrics that I had brought along today and ended up wearing both of them. 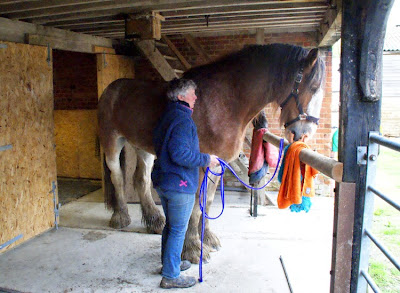 He seems to be telling Claude that it all feels good. Incidentally Riley is the smallest of the two. Claude is 18.1 hh at the moment and may be bigger once he has regained the weight he lost as a result of starvation. 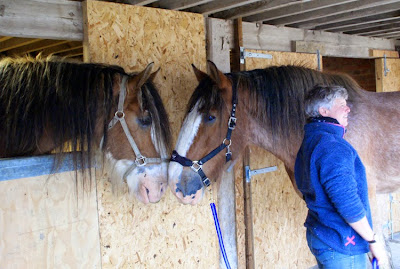