Another lovely session with luscious Jaz and an opportunity to try out one or two gems from the Mark Rashid clinic. But first we had to say hello to the new next door neighbour. 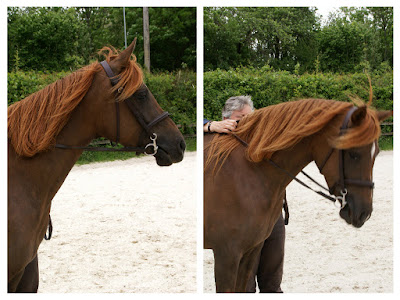 First of all I stripped Jaz of her flash noseband and I lowered the bit a hole so that we didn't have three wrinkles each side - any lower and she started chomping on it. Then I asked her to soften to the bit in the normal way however this time I imagined that I was pushing the rein towards her without actually pushing the rein towards her. Almost instantaneously she tipped her nose down and softened.

Once we had that established Sarah began to short rein her asking her to soften at halt. You can see just a slight dip towards the verticle which is what we really want rather than going behind the verticle.

In walk she was more inclined to offer to drop behind the verticle and she can be asked to lift her head a little by lifting one rein. Ideally we don't want her to be behind the verticle. By just asking for a couple of paces and then releasing first of all we teach her what we want and we also build up the muscles in an incremental way. 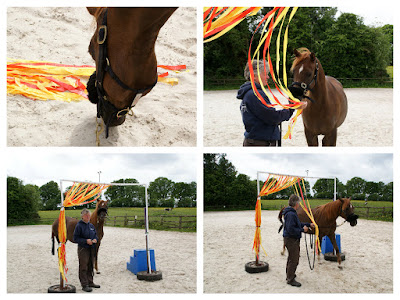 A few weeks ago Jaz had a little scare with the fly curtain and had become wary of it. We wanted to undo that by concentrating not on what she was doing but once again on how she was feeling. Allowing her to relax by the curtain helped her to slow her mind down and she began to walk through quite calmly. Sarah has also widened the pole with the fly curtain on it to make it easier for Jaz.

With the same principles in mind, we also did a little long reining so that we could discuss the relative merits of the position of the handler and the use of body language. The idea was to keep up a conversation with Jaz rather than encouraging her to go into automatic pilot at any stage.

In the early days when we worked with Jaz I would get little missives from Sarah about the highs and lows of her practising sessions. On a flighty day I would remind her that Jaz is simply a Four Year Old Arab which was abbreviated to FYOA. Although the title will last another year, Jaz is just so much calmer than she was and feels really mature. Today I was standing next to her on the mounting block and I was so tempted... 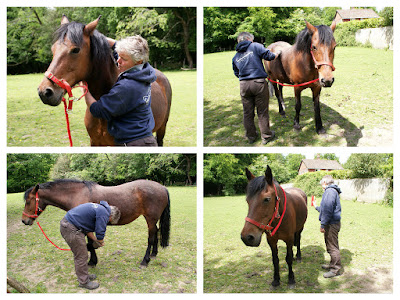 A warm afternoon visit to Anna who was feeling particularly relaxed. I have always cared about how Anna feels as there is nothing that she 'does' to work on; she is and always will be a field ornament for her elderly owners. Nevertheless she makes a little progress each and every time I see her which is only once every eight weeks or so when she has her feet trimmed.. She must remember that I make her feel good. Today she was caught within the first minute of my arrival and I groomed her gently with four different brushes and picked out her feet. For the first time I felt able to walk all around her body and to touch her on her tummy. She's decided that this minion is really useful.