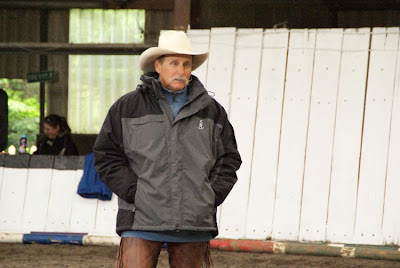 We are so lucky to have Mark Rashid here again and so close to home. I got the opportunity to thank him once more for the work with me and Theoden two years ago from which I am still reaping the benefits. I had the most fantastic calm ride on Theoden yesterday and these days he actually feels as if he enjoys going out riding and it isn't all against his better judgement.

Talking of judgement, I like the fact that there are a few set rules for people at Mark Rashid clinics. Quite apart form having your order for a 'jacketed potato' in early, no smoking anywhere on the premises, no one is allowed to talk badly of any of the riders or their horses. In this way he seeks to provide a safe training environment - after all we are privileged to be able to watch. 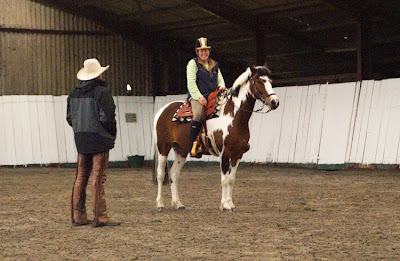 I have to admit to feeling a little tearful when Dillon walked into the arena so willingly this morning. Debbie has come such a long way with this horse - and not just because she had come from the Isle of Wight to be here. 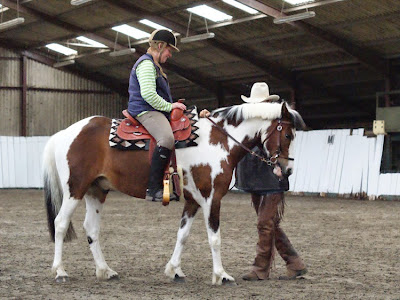 She and Mark worked on softness - asking Dillon to back up or move forward or halt without a brace or a push. 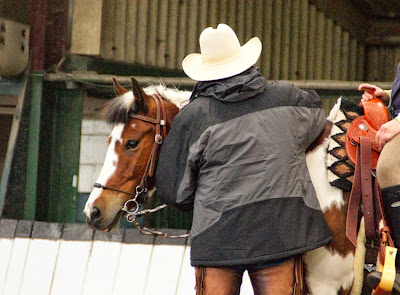 Like everyone Mark ended up with his arms all around him because he is such a lovely horse, so different from the one that wanted to rear when he was being led, eat you if you brought his English saddle near him, or pull back when he was tied up. 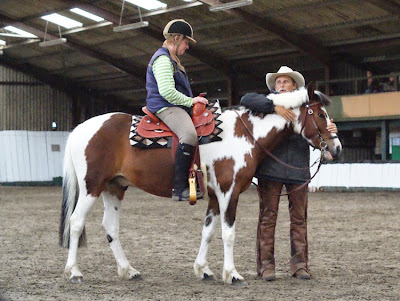 With a soft halt to end, Debbie is already looking forward to tomorrow. 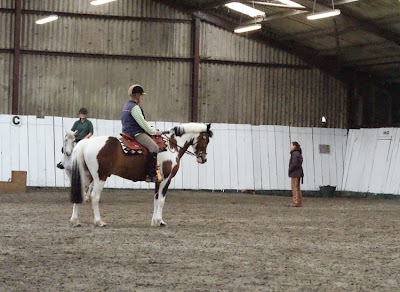 Next up was Evie with Lorraine, hoping that he would have some ideas to help Evie get over her fear of poles. 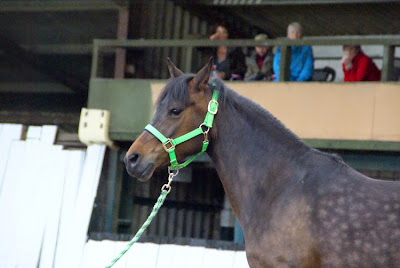 Now it was time to set some rules for horses. being a lot clearer with where the boundaries are with a pony that is inclined to bite if she is told what to do in a way that she doesn't like. In her case and for now, he wanted her a good arms length away from him when leading and coming to a halt. 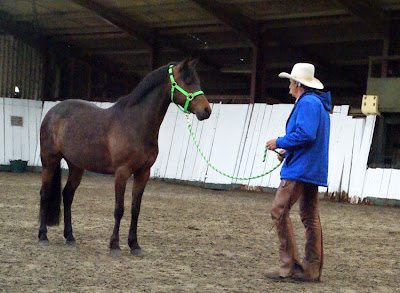 He pointed out that Evie should be stopping her body, not taking her second front foot past the first, when he turns to look at her. Only when this was established would he try to work with a pole, he said, since that was part of the problem. 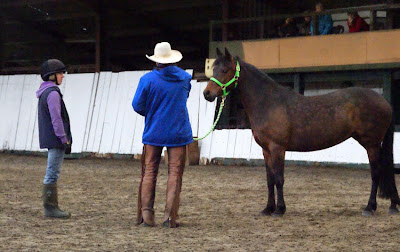 He highlighted the fact that Evie's problem began before she tried to go over the pole and was evident even as she approached it. He worked with her quietly, asking her to go forward to the pole and then allowing her to completely relax. At first she would race over the pole and panic but soon she began to stop and investigate the pole instead. The art is turning fear into curiosity. 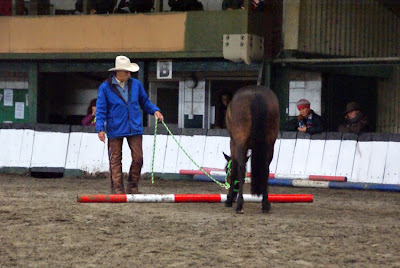 Next he began to intrigue her by rolling the pole away from her so that she could follow it. That got her really interested... 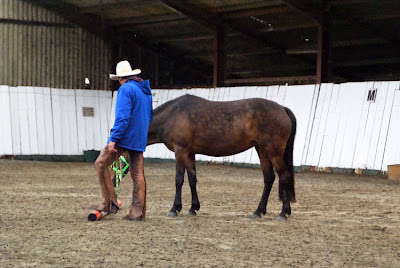 ...and by the end of the session she had her head over the pole. 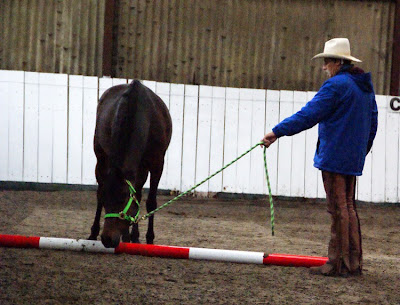 The next horse was worried about loading and in the same way Mark explained that the problem started even before the horse arrived at the horsebox with the horse resisting coming forward or attempting to flee and run his handler over. Once again he began by setting up some boundaries before beginning work at the horsebox. 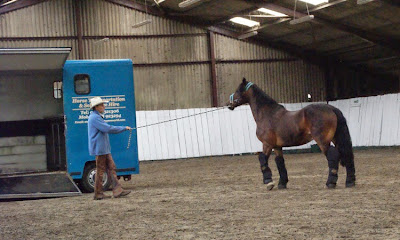 Once the horse was next to the horsebox he just asked him to stand there and relax and when he did so, he led him away, at the same time not allowing him to flee whilst doing so. 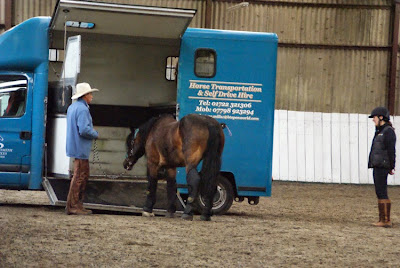 Next the horse was asked to move forwards using a kiss noise as a cue. This was backed up by a twirling rope particularly if the horse tried to run into him but it was all done very quietly and with superb timing. With a microphone in place you can clearly hear Mark breathe out and relax the instant he gets what he is asking for and everything else stops too. 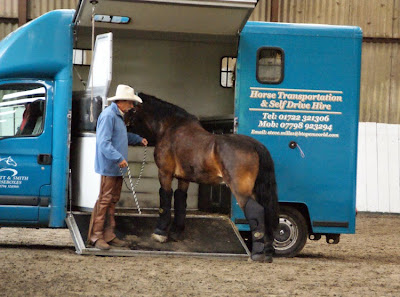 Once in the horsebox the horse is encouraged to relax. For now, this is enough and Mark will begin shaping the behaviour, asking the horse to face the rear of the lorry during the second session tomorrow. 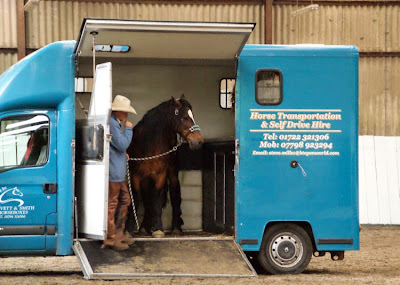 However the presence of hay, now that the horse was far more relaxed, literally helped to provide a turning point. 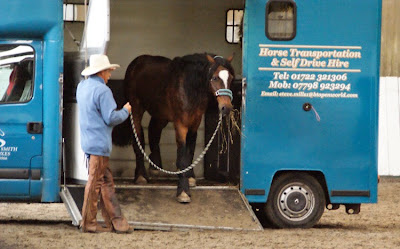 Amanda wanted to work on her turns with Dartmoor pony, Donald. Some adjustments to her hand position helped him to release his neck and to move his legs laterally. 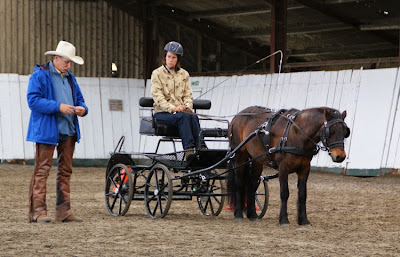 Just as in the saddle, Amanda was asked to notice changes in the energy of the carriage in order to spot when Donald was asking whether she minded him going into walk for this bit! In that way, she was able to answer his question before he made a decision. 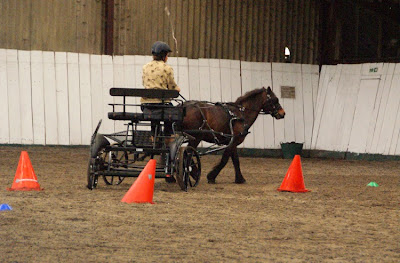