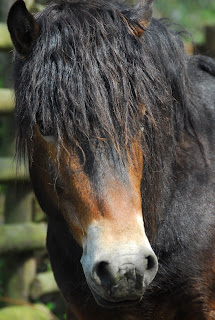 In the end, it wasn't my decision to have Piper darted that led to his death although it did mean that I changed vets. The combination of drugs that he was given when he was intravenously sedated and then re-sedated meant that he couldn't be given the antidote injection which would have brought him round more quickly and cleanly. Instead he had a prolonged struggle during his recovery where he was thrashing around, trying desperately to get up. At times his back legs would work and his fronts wouldn't and he would crash back down. He most probably hit his head. Once he was up, he staggered around for an age too. If he did have a pre-existing weakness that led to an aneurism, then this was precipitated by the stress of the whole procedure starting with the arrival of the vet. My mistake was to trust anyone other than Chris or Nenad from The Barn around my pony and not to send the vet home when I thought he was in the wrong frame of mind.

I don't intend to name and shame. The vet is extremely expereinced and knowledgeable and would never have intended to contribute to the death of my pony. Without being sanctimonious, I want Piper's legacy to be that we should all have the courage to stop experts and professionals when we sense that things are going wrong.
Posted by Loisaba Wildlife Conservancy at 8:47 AM