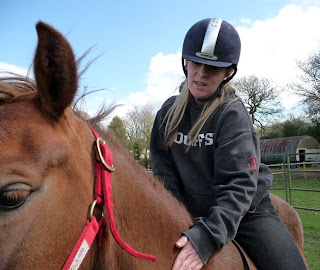 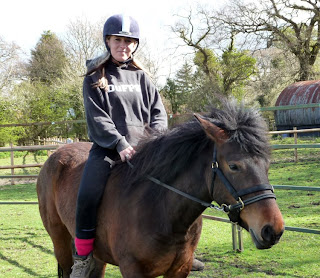 After a couple of days off over the weekend, Rosie and Fern have been continuing with their education. Yesterday I tied up a few loose ends - Rosie allowed the massaging machine along her neck when she was loose so should be okay with the clippers next and she also had a little loading practice; Fern did some long reining at trot. Today they were both backed with very little ceremony. Both bareback for now and both fine.
The rest of the day was not so peaceful. Piper is still pretty wild although I can get near to him when I want to and he will have his halter on easily. Once again it was time to have his feet trimmed and I can only thank goodness that it's only an annual event although I am going to have to have a re-think. It may be that a concrete area would provide sufficient friction to enable me to dispense with having him trimmed at all.
I tried to make a rational decision about the approach that should be taken and finally decided against close-up intramuscular sedative (followed by a further intravenous one) on the basis that it would put a vet at less risk if Piper were to be sedated from a distance - I also felt there was less risk of him associating any pain with humans. Accordingly, I arranged for another vet (my own will not stock Immobilon) to come and dart him. A combination of Piper's thick skin and his tendency to face people meant that the dart didn't go in straight away and we were them left with an even riskier situation of a dart hidden in the straw. Eventually he was given a high dose of intravenous sedative which resulted in him lying down but juddering the whole time he was out for the count and then floundering around as he started to wake up. It was all pretty ugly and I am feeling wretched about it. Having stayed with him until he was fully mobile, I have been up to the field in the pitch dark to check him again this evening and he is outwardly fine. I have no doubt that he is physically sore and I wait to see what effect yet another horrid experience has had on his trust in humans. I can only justify my decision on the basis that I was desperate to keep people safe but in the event, I don't think the risk was any less than it would have been. This situation is far from ideal and yet the only other alternative is to have him put down - something I am loathe to do. I took him on, he is my responsibility and for the rest of the year he is fine. Doing more work with him doesn't seem to get me any further either. Ho hum - somebody say something to make me feel better.
Today was the second visit of Tim Mockford, Applied Equine Podiatrist, and he did well to trim Piper's feet at such a strange angle. Chancer and Petra are doing well with their barefeet and seem to be managing all kinds of surface albeit that they haven't had a lot of work.
Posted by Loisaba Wildlife Conservancy at 11:22 PM