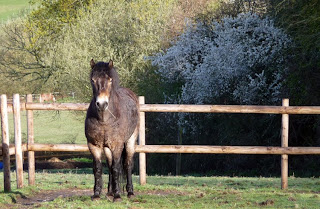 Piper died during the night. It looks as if he had a heart attack because there is no sign of him struggling or scrabbling but I have little doubt that it was due to the shock of the veterinary treatment he received on Tuesday. Poor baby, every time he has met men it has been a battle. I am so glad that he had two years of kind treatment with me and indeed that I left him very much to his own devices in this last year. However, I would say to anyone buying a semi-feral foal to make sure that they use gentle methods to tame them as soon as they can so that every veterinary and farriery experience doesn't have to be a trauma which only serves to reinforce their fear. Of course, Piper was never meant to be domesticated - he had lived out as a stallion on Exmoor for 7 years. I really think that I put everything I had into trying to tame him in the first place and if love alone was enough, he would have got there. With hindsight, I wish I hadn't had him sedated in the way that he was on Tuesday - the choice I made was the wrong one. Quite honestly I don't know how I feel at this moment. I am waiting for the vet to ring me at the moment and then I'll need to make arrangements for his poor body to be taken away.

Postscript: I have just spoken to the vet and he suspects that Piper had an aneurism which could have gone at any time that he was placed under stress. I don't know whether that makes me feel better or not.
Posted by Loisaba Wildlife Conservancy at 10:05 AM